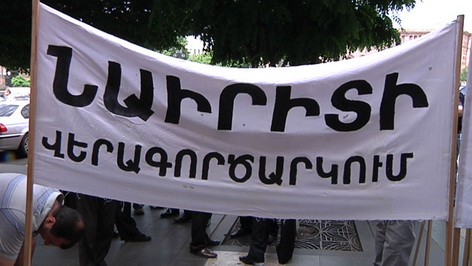 ArmInfo. Armenian Minister of Energy and Natural Resources Levon Yolyan does not rule out possible reactivation of Nairit Plant, the erstwhile chemical giant of Armenia. "Negotiations on possible reactivation are underway. It will be possible to speak of the prospects and opportunities by April 1 with due regard for Russia's proposals," the minister told reporters on March 17.

He said it is necessary to wait for specific proposals from the Russian party. At the same time, the minister added that the newly-created working group has already been instructed to involve experienced and authoritative specialists.

To recall, Minister of Energy and Natural Resources of Armenia Levon Yolyan said in Parliament on March 16 that Russian "RT-Khimkomposit" holding, which is a part of "Rostekh" State Corporation, is preparing proposals to the Armenian government for reactivating Nairit Plant.

To note, by the order of Armenian Minister of Energy and Natural Resources Levon Yolyan, a working group has been set up to research the current condition of Nairit Plant CJSC and the further steps to help the plant overcome the current situation. The working group is headed by Deputy Minister of Energy and Natural Resources L.Shahverdyan, and includes representatives of the Ministry, Nairit Plant and Yerevan Thermal Power Plant. The Energy Minister has instructed the working group to submit the proposals on development of Nairit Plant in the shortest time possible.

At the same time, the Nairit Plant employees do not trust the efficiency of the new working group set up to survey the situation at the Plant, Karine Shahverdyan, member of the coordination group of former employees of Nairit Plant, has told ArmInfo.  "We do not trust the good intentions of the group and we pin no hopes on that group.  But we will be making consistent steps to include representatives of the Plant's former employees in the group," Karine Shahverdyan said.

Nairit Plant has been idle since April 2010. At the moment the debts of Nairit Plant amount to 50 billion AMD (about 130 million USD). The Plant's shares were given as security against the CIS InterStateBank's 70 mln USD loan provided in 2006 for 5 years - till late Dec 2011 - at 12.5% p.a. In 2006, 90% of Nairit Plant's shares were sold to Rhinoville Property Limited (UK). The latter owns an 89,999% stake in the plant, Armenian Ministry of Energy and Natural Resources - 4,496%, Gazprom Armenia CJSC (previously ArmRusgasprom) - 3,596%, and Yerevan Thermal Power Plant - 1,907%.  In 2015 the World Bank conducted a financial and technical audit at Nairit Plant at the request of the Armenian Government. The WB considers the re-launch of the plant to be inexpedient because it will need at least $250 mln.  But even if investors are found, the WB experts do not think the product will be competitive, because it will have a high prime cost. Most experts say that the results of the WB audit can be considered as recommendations to the Plant's bankruptcy process.