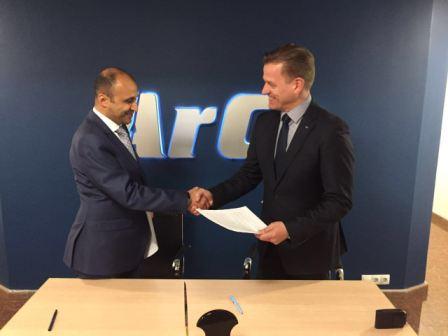 
According to the official statement a joint working group on organization and technological cooperation will be established in the nearest future, which will involve experts from both systems.

General Manager of NSPK Vladimir Komlev stated during the ceremony of signing the agreement that currently Mir payment system aims to develop network of Mir cards acceptance not only in Russia but abroad as well. "Armenia is a very important partner for us, with witch we launch a project valuable for the both systems. Our specialists will start solving required technological issues in the nearest future to launch mutual acceptance of the cards by our payment systems. We have also discussed the possibility of issuing co-badge cards "Mir"-ArCa, this will be the next step forward in our cooperation", he stressed.

CEO of Armenian Card Ishkhan Mkhitaryan considers the agreement with the Russian national system of payment cards as another important step towards enhancement of spectrum of provided services and development of functions within Armenian Card.

Armenian Card National Payment System was established by the Central Bank of RA and 10 trade banks in March 2000. The Company presents service package which gives an opportunity to banks to issue and acquire ArCa, MasterCard, VISA, American Express and Diners Club International cards using the modern technics, technologies and software of the processing centre as well as the Company's professional assistance. The company is MasterCard Europe Principal Member and Processing Centre (Member Service Provider), third Party Processor for VISA, third Party Processor for American Express, third Party Processor for Diners Club International. As of today shareholders of Armenian Card are CBA and 17 commercial banks of Armenia. By the end of 2014 Armenian Card announced about introduction of 3D Secure technology. National System of Payment Cards (NSPK) Joint Stock Company is the operator of Mir National Payment System. The objectives of NSPK are to ensure uninterrupted processing of transactions made with the international payment system cards within Russia and to establish and develop the National Payment System. As of April 1, 2015 the processing of any Russian domestic transaction made with a card of any payment system, including international payment systems, within Russia occurs through the NSPK Transaction Settlement and Clearing Center (NSPK TSCC). In December 2015, the first national payment cards Mir were issued. Its name and logo were selected as a result of nationwide competition in Russia. As of now 90 banks have jointed "Mir" payment system. JSC NSPK was established on July 23, 2014. 100% of JSC NSPK shares belong to the Central Bank of the Russian Federation. NSPK is regulated by Federal Law No. 161 On the National Payment System, The National Payment System Development Strategy and The Concept of Creating the National System of Payment Cards.