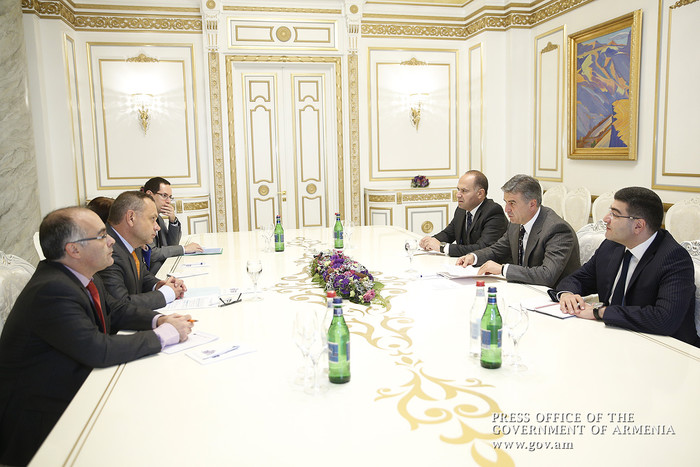 ArmInfo. Armenia's Prime Minister Karen Karapetyan received French Ambassador to Armenia Jean-Francois Charpentier, the press-service of the Armenian government informs.  The Prime Minister said that the Armenian-French relations are particularly friendly as evidenced by sustained contacts and reciprocated visits. Pleased with the hectic agenda of bilateral relations, Karen Karapetyan stressed the importance of implementing joint programs in the economy.

Convinced that there is great potential for the development of Armenian-French relations, the Prime Minister mentioned the need for broader involvement of French businesses in our country. The Premier highlighted the role of the French Agency for Development in ensuring continuity of the ongoing projects.

According to Karen Karapetyan, interregional cooperation is on the rise between the two countries. In this regard, he noted the role of the third Armenian-French conference on decentralized cooperation due this December in Yerevan (the conference is held once in three years-ed. note).

Jean-Francois Charpentier stated about readiness for close cooperation with the Armenian government in order to implement new joint programs, develop bilateral relations and boost economic exchanges between the two countries. He said the French Development Agency is set to make new investments in Armenia's infrastructures to a total amount of about USD 40 million.

The Ambassador stressed that a number of French companies are interested in deploying activities in Armenia. Efforts are being made in this direction. The parties concurred in that promising investment programs might be implemented in various sectors of the economy, including agriculture, information technology and tourism.  According to the National Statistical Service of Armenia, trade turnover between Armenia and France in Jan-Aug 2016 totaled $31.6 mln, with 32.3% y-o-y decline. Particularly, export totaled $2.3 mln dropping 33.9% y-o-y amid fall of import by 32.2% to $29.3 mln.