Louis Pouzin, one of founding fathers of internet, to be bestowed with Presidential Award of Armenia 2016 for Outstanding Contribution to Global IT 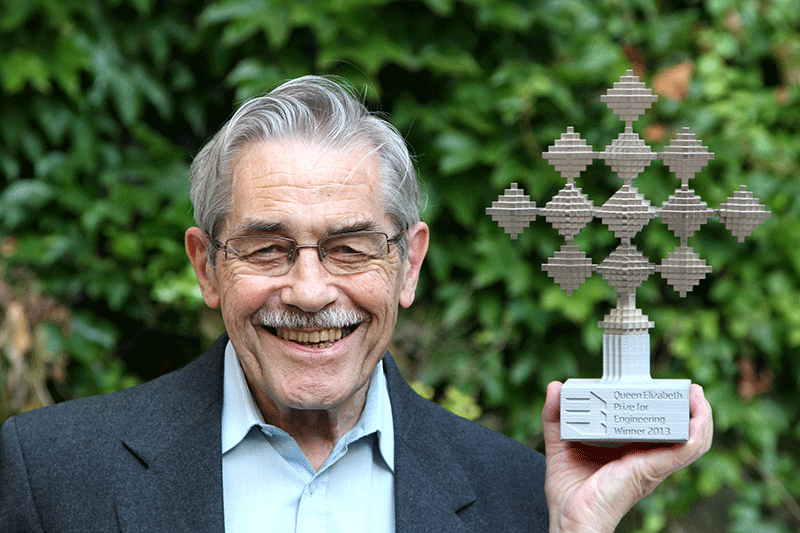 ArmInfo. A press conference  dedicated to announcing the winner of the Annual Award of the  President of the Republic of Armenia For Outstanding Contribution to  Global IT for the year 2016, took place at the RA Presidential  Palace, the press office of VivaCell-MTS has told ArmInfo. The press  conference was presided by Armen Gevorgyan, the Chairman of GIT Award  Committee, Chief of Staff to the President of the Republic of  Armenia, Ralph Yirikian, the General Manager of VivaCell-MTS - the  Company-sponsor of GIT Award, Hovik Musaelyan, Chairman of Executive  Board of GIT Award, and Tony Moroyan, Representative of the Award  Selection Panel, the CEO and Chairman of Viasphere International.

The speakers highlighted the importance of the Award for the  development of Armenian ICT Sector and promoting the country's image  internationally. GIT Award is implemented in Armenia for already  seven years, hosting outstanding professional from around the world  once a year. Armenia hosted the following international gurus in the  previous years: the retired CEO/ Chairman of the Board of Intel  Corporation, Craig Barrett in 2010, co-founder of Apple Computers,  Inc. Steve Wozniak in 2011, Chairman Emeritus of Synaptics, Inc.  Federico Faggin in 2012, President of the Society of Semiconductor  Industry Specialists, President of Techno Vision consulting firm  Tsugio Makimoto in 2013, Senior Vice President and General Manager  for the Insieme Business Unit at Cisco Mario Mazzola in 2014, and  Chairman and CEO of Kaspersky Lab. Eugene Kaspersky in 2015.

VivaCell-MTS supports GIT Award during the whole period of its  existence, having donated AMD 144.2 million for the realization of  the program. The Company's support to the award from the very  beginning is based on its vision of Armenia's future - country with  internationally competitive ICT sector. The Company contributes to  this national objective in synergy with impactful projects  implemented at the national level. Apart from positioning Armenia and  promoting it internationally as country having achievements and huge  yet unrealized potential in the development of ICT, and opportunities  for investment in the sector, the Award also has a great role to play  internally. The GIT award is stimulating the attractiveness of ICT  sector as a professional choice among the Armenian youth. Each visit  by a laureate to the country, followed by awarding and lecture by a  prominent leader in the sphere of Information Technologies, is a  serious promotion of the ICT for the younger generation.           "The sphere of Information and Communication Technologies is one of  the key directions of Armenia's economic development, and the Award  of the President of the Republic of Armenia For Outstanding  Contribution to Global IT has a huge importance in terms of promoting  Armenia. Time will pass, and internationally acclaimed figures in the  sphere of IT will arrive in Armenia, increasing the awareness about  our country as one that relies on its intellectual potential," said  Chairman of GIT Award Committee, Chief of Staff to the President of  the Republic of Armenia.

"We are confident that the gurus, who have received this honorary  award, will return to Armenia in coming years, bringing with them  contemporary culture of high technologies and will boost Armenia's  image around the world as a country relying on intellect and  knowledge," said the Chairman of Executive Board of GIT Award Hovik  Musaelyan.

In addition to supporting the GIT Award, VivaCell-MTS has been  supporting numerous projects in ICT sector with the amount of social  investment in the sphere totaling AMD 953.6 million. "For  VivaCell-MTS, standing next to the GIT Award from the very beginning,  the award is a powerful tool aimed at showing our achievements in the  sphere of ICT to the world and strengthening the country's image,"  VivaCell-MTS General Manager Ralph Yirikian commented.

"I'm proud that we have managed to maintain the high mark of the  Award of the President of the Republic of Armenia For Outstanding  Contribution to Global IT, and by doing that, to attract the legends  in the sphere of IT to Armenia and become award- winners. We'll  repeat it this year as well," said Tony Moroyan, the Representative  of the Award Selection Panel, the CEO and Chairman of Viasphere  International.