The Company of ACBA Leasing signed an Intentions Memorandum on concluding an Agreement with the official distributor of the Caterpillar in Armenia- Zeppelin Armenia  and Caterpillar Financial. 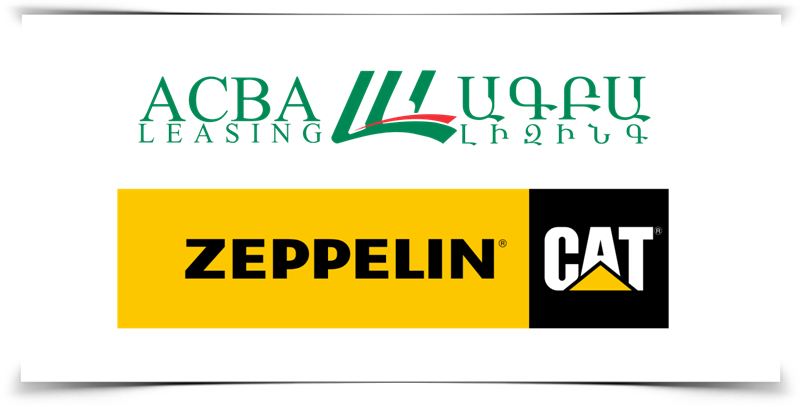 ArmInfo. The Company of ACBA Leasing signed an Intentions Memorandum on concluding an Agreement with the official distributor of the Caterpillar in Armenia- Zeppelin Armenia and Caterpillar Financial. Within the framework of this document sides agreed to continue their long term relationship within the purpose of rendering more profitable conditions of funding for CAT machinery at the territory of Armenia, expecting the sales volumes growth. According to the information of the ACBA-Leasing press office, the memorandum was signed on December 7.

According to the source, in the nearest future sides will come out with an official financing proposal, and the terms of that proposal were agreed based on increasing number of CAT  machinery leasing contracts, market development potential and the necessity to apply best international practices at the  level.

To mention, companies of ACBA-Leasing, Zeppelin Armenia and Caterpillar Financial will sign a tripartite memorandum on cooperation, assuming more profitable conditions of purchasing the CAT equipment through the ACBA leasing company. According the information shared with ArmInfo by the press office of  the company, the parties will present the conditions of funding  in the nearest future.  Considering the development of this sector due to the cooperation between ACBA-Leasing and Zepelin Armenia, the funding by Caterpillar Financial will be implemented within lower interest rates than it used to be done before.  The long and successful cooperation between  ACBA Leasing and Zeppelin Armenia, official distributor of Caterpillar in Armenia, played an essential role in  Armenian companies development in different sectors.  Now, when the interest rates are decreased, the clients will be able not only to increase the production volumes, but also to reduce expenses.

According to the ranking of credit companies of Armenia as of October 1, 2o16, prepared by ArmInfo, ACBA leasing assets formed  AMD 13.6 bln (USD 28,6 mln), with the total capital of AMD 12,4 bln (USD 26 mln).  Three quarters of 2016 were completed by ACBA Leasing with net profit of AMD 158,6 mln ( USD 2,5 mlnwith year over year  growth in thrice).  The main shareholders  of ACBA Leasing are the ACBA Credit Agricole Bank with 54% capital share and 'redit Agricole Leasing & Factoring - 38% share.  To remind, Caterpillar Financial is a financial subsidiary of Caterpillar Inc., which held a 19th position in Forbes 50 list of most admired companies in the world.  Caterpillar Inc. is a technology leader and the world's largest manufacturer of construction and mining equipment, natural gas and diesel engines, and industrial gas turbines.

Cat Financial was founded more than 30  years ago with the headquarters in Nashville (Tennessee).  Cat Financial has been providing financial service excellence to Cat customers. We offer a wide range of financing alternatives to customers and Cat dealers for Cat machines and engines, Solar(r) gas turbines and other equipment and marine vessels.

Later a  geographical expansion into CIS countries took place. In 2002, Caterpillar Financial OOO was founded in Moscow, Russia and in 2008 TOV Caterpillar Financial Ukraine was founded in Kiev, Ukraine.  The Zeppelin Group, which operates at 190 locations worldwide with around 7,500 employees, generated sales of EUR 2.55 billion in the 2012 financial year. It is organized into five Strategic Business Units:  Construction Equipment EU and Construction Equipment CIS (sales and servicing of construction and agricultural machinery in Europe and the CIS countries), Rental (rental and leasing of construction machines and equipment), Power Systems (drive and energy solutions), and Plant Engineering (plants and systems for bulk goods and liquids).