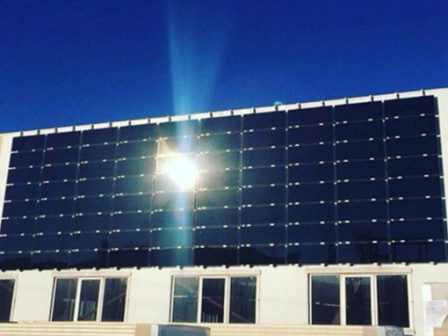 ArmInfo. In Yerevan on June 29,  the official launch of SolarOn, the first factory in Armenia to  produce solar panels, will be held. According to the press release,  the company has been working in the test mode since spring of this  year and has already implemented a series of projects for the  installation of solar stations for industrial and residential  facilities. Solar mini power plants are already installed in the  center of Yerevan, on the roof of a residential high-rise building.

The solar potential of Armenia according to open data of NASA is one  of the highest in the region and is 1760 - 1800 kWh / m? a year. Such   conditions are sufficient to ensure a high level of output solar  energy and repay  the cost of installation of solar power plants for  5-7 years. This means that if the service life of the panels is 30  years, the owner of the mini-station will not pay for the used  electricity for almost 25 years.

According to the SolarOn Company founder Arthur Alaverdyan, the   development of solar energy is of strategic importance for Armenia,  as it is able to solve the problem of energy dependence and to cancel  the cost of electricity for consumers. "I, as a scientist and  businessman, see my mission in the development of Armenia in  attracting and implementing high technologies, especially  technologies that solve the most acute problems for every resident,  business and Armenia as a whole. I am sure that SolarOn will become a  catalyst for the development of the industry, and our experience will  serve as an example for many other investors, " Arthur Alaverdyan  said.

Initial investment in SolarOn amounted almost $ 2 million. According  to Alaverdyan, as the market develops, the volume of investments will  increase  for several times, while the cost of solar panels produced  in Armenia will gradually decrease. Today, a solar mini-station with  a capacity of 1.5 kW, capable of covering about 200 kWh per month,  will cost the buyers 1.5-1.7 thousand dollars.

According to the SolarOn company founder, the  project has already  interested banks, with the offer of leasing for industrial customers  and individuals. However, the producers of solar panels are not going  to stop only in the Armenian market. The company plans to quickly  bring the Armenian brand to neighboring countries and Europe.

To note, According to the Government program, to implement solar  energy  development program, it is planned to sum up the tender for  the  implementation of the project for the construction of a solar   photovoltaic station Masrik with a peak installed capacity of 55 MW   before the end of 2018.  According to ArmInfo, the total amount of   investments in this generation facility will be $ 65-70 million. 50   companies participate in the contest.  To implement the same general   program for the development of solar energy, which provides for the   creation up to 2020 of several stations with a total installed   capacity of 110 MW, the government envisaged to attract $ 129   million.