Armenia and Egypt start economic relations from scratch: Yerevan is already announcing another investment project, without introducing any certainty 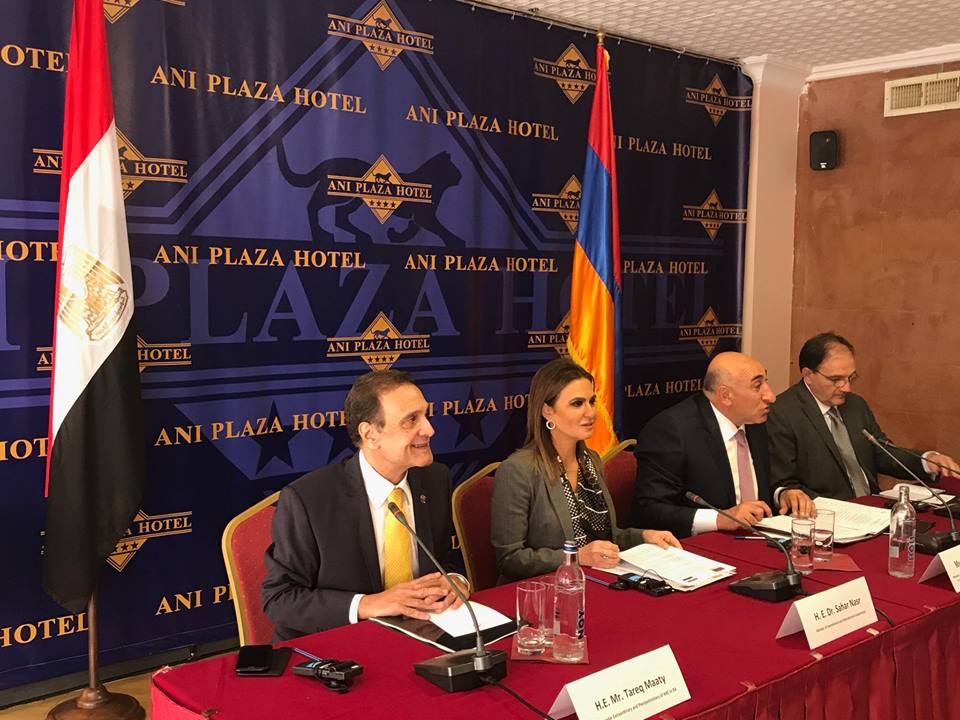 ArmInfo. The Egyptian pharmaceutical company Markirl plans to organize production in Armenia. Representatives of the company on October 3 intend to visit Armenia and determine the location of the future enterprise. Answering the question of ArmInfo, Minister of Territorial Administration and Development David Lokyan said on September 29 on the margins of the 5th meeting of the Armenian-Egyptian intergovernmental commission on economic, scientific and technical cooperation.  At the same time, the minister refrained from mentioning both the timing of the launch of production and the cost of the program.

According to Lokyan, Armenia and Egypt can jointly meet the needs of the Eurasian market. The Egyptian company Markirl, which, according to him, is not new to the local market - has been selling its products for more than two years, intends to produce over 26 names of medicines in the RA. For more substantive information, the official called for appeals to the ambassadors of the two countries.

By now, according to the minister, who is also the co-chair of the Armenian-Egyptian intergovernmental commission, despite the fact that the Commission was established in 1996, the next meeting is held at an interval of 12 years, since the last - the 4th meeting was held in 2005 and for many years due to geopolitical developments and unfavorable political conditions in Egypt, the work of the intergovernmental commission was interrupted. At the 25th year of establishment of diplomatic relations, Yerevan and Cairo cannot boast of high volumes of trade turnover - within the last 10-12 years, the volume of trade between the countries did not exceed $ 1-3 million. However, David Lokyan is optimistic, as, he said, countries the same starting positions. "In Armenia and Egypt, GDP per capita is within $ 3500-3700. And here and there is a serious task to attract investment and ensure a high level of foreign trade turnover," he said. And the recorded negative dynamics, according to Lokyan, is due to the lack of a Coordination Center and a basis for cooperation, which could lead to an increase in turnover. "The resumption of the work of the intergovernmental commission will be the main signal for a new start," the minister said. He also assuredly assured that the parties will be consistent in strengthening cooperation and implementing the planned plans.

Tourism, according to Minister Lokyan, can contribute to the expansion of bilateral trade. Egypt can become a serious platform for Armenia to ensure sales markets in all countries of the Arab world, as well as on the African continent. Armenia can become the best springboard for entering the markets of the EEU and the EU for the developing economy of Egypt. The spheres of agriculture, education and IT can also be of interest to the business of the two countries.

Armenian Ambassador to Egypt Armen Mekonyan believes that over the past 25 years, relations between countries have developed dynamically. At the same time, he said, against the backdrop of political, cultural and educational developed cooperation, trade and economic relations, for objective reasons, left much to be desired. He noted that in due time the implementation of large Egyptian projects in Armenia in the field of pharmaceuticals, IT, construction was planned. "Unfortunately, as a result of geopolitical changes in the Middle East, projects were suspended," the diplomat said. Today, there are all conditions for starting a relationship with a "clean slate": many barriers on this path have been eliminated - the political situation in Egypt has stabilized, air communication between Yerevan and the Egyptian resort towns of Sharm El Sheikh and Hurghada has been established. Cooperation in the field of textiles is of interest to the business of the two countries and there are plans to organize joint production, recently, according to the results of the Armenian-Egyptian forum in the field of IT, there were identified the sides of cooperation in this direction, the ambassador said.

According to the Minister of Investment and Development of Egypt Sahar Nasr, the parties outlined a "road map" for further expansion of relations. According to the minister, the potential of the foreign trade turnover of the two countries does not correspond to the fixed indicators. Today's political and economic stability in Egypt, as well as ongoing reforms in Armenia, as Nasr noted, will help the real deepening of ties in various spheres of the economy.

Following the results of the 5th meeting, Armenia and Egypt signed a number of memorandums and agreements in the field of trade and investment, youth and sport, education and science, as well as archives.