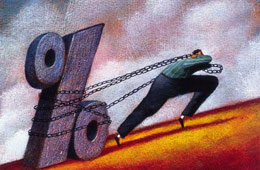 ArmInfo. Commercial banks  and credit organizations of Armenia will be limited in their rights  to charge fines and pennies. Amendments to the Civil Code of Armenia  were made at the sitting of the Armenian parliament on December 13 in  the first reading.

According to the First Deputy Minister of Justice of the Republic of  Armenia Artur Hovhannisyan, in the relations of commercial banks and  credit organizations with their clients, a situation has begun  whereby financial structures, using the liberal nature of the market,  began to abuse their rights, often fixing fines and pennies in  contracts with customers, which sometimes exceed by 10 times the  principal amount of the loan.

According to the expert, numerous cases were recorded when a person  who received a loan in a commercial bank for the amount of 300  thousand drams for the purpose of rendering medical assistance to his  child, and being temporarily insolvent, eventually owed the bank not  only the principal amount of the loan, but plus 3 million AMD in in  the form of fines and pennies. "It is necessary to put an end to this  practice," the deputy minister stressed. In particular, the draft law  sets the maximum rate for fines, which can not exceed 4 times the  maximum interest rate set by the Central Bank for banks, which by the  current situation is 48%.  At the same time, the accrued penalties  and pennies on the customer's debt can not exceed the double size of  the principal amount of the loan, regardless of the timing of the  delay. Referring to the above example with a sick child, Hovhannisyan  explained that according to the amendments, the bank or credit  company will no longer have the right to demand from the borrower an  amount exceeding 600 thousand drams.

Another change concerns the management of collateral. Currently,  after the sale of the property on bail, the creditor will be obliged  within a week to notify the borrower about the sale of the property  and the repayment of part of the loan, and also to report the  remaining amount. Otherwise, as today's practice shows, creditors do  not notify borrowers about this, continuing to charge penalties and  pennies on the amount of debt remaining after the sale of the  collateral. Amendments to the Civil Code will oblige the creditor to  notify the borrower on time, since otherwise no penalties and pennies  can be applied to the latter. Moreover, banks and credit companies  often wait for several months, and even a year before declaring for  debt collection. To prevent this from happening, a maximum period of  3 months is set, after which banks will not have the right to charge  fines and pennies.

Let's notice, that for last years on this question the suffered  citizens repeatedly sent complaints to the financial ombudsman. But  the current legislation did not allow to protect them from such  usury.