In 2017, Armenia air-company expanded its own flights geography: In 2018, it promises direct flights to Europe 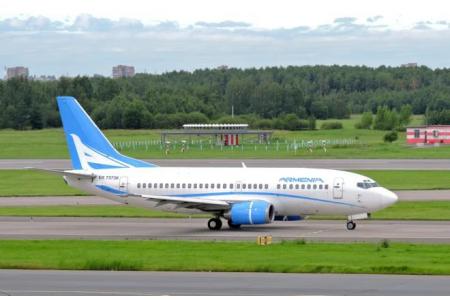 ArmInfo. The "Armenia" airline,  having paid 390 million AMD to the state budget, was on the 305th  place among the 1000 large taxpayers of the Republic of Armenia.   During the current year, the local air carrier was able to reduce by  50% the losses it received in 2016.  Nevertheless, despite obvious  achievements, the Moscow direction remained unattainable for the air  carrier. Robert Hovhannisyan, Director General of the "Armenia" Air  Company, responded to the question of ArmInfo on December 26 at a  meeting with journalists.

Robert Hovhannisyan recalled that "Armenia" received the operator's  certificate on February 22, 2016 and in June 2016 started regular  flights. According to the submitted application, the airline planned  to carry out regular air transportation in 17 directions. It was  envisaged that the airline would begin regular flights on April 21  from the first two directions - Tel Aviv and Moscow. Further, the  company undertook to launch regular flights to Tehran, Dubai, Prague,  Kiev, Minsk, Barcelona, London and Larnaca. Among the priority areas  were Russia, where, in addition to the capital, the airline also  planned to fly to Sochi, Rostov-on-Don, Mineral Waters, Samara, and  flights from Europe to Germany and Italy were planned.

From June 2016 to December, the airline carried 22,000 passengers,  from June to December 2017 passenger traffic rose to 53 thousand  people. For 2017, the airline carried out 480 flights per year, that  is, on average a little more than one flight a day. All in all, as  the head of the company said, flew 1,660 hours, however, in order to  ensure the payback of an aircraft, it must fly at least 3500 hours  per year.  "Nevertheless, if in the beginning - in 2016 the company  flew at a loss, as early as 2017, they managed to halve the incurred  losses by half," Hovhannisyan said. This, he said, was made possible  by expanding the geography of their flights and increasing the  frequency of existing regular flights. To date, Armenia operates  regular flights from Yerevan to Voronezh, Mineralnye Vody, Tel Aviv,  Beirut. Tehran temporarily suspended, but from March next year the  route will be restored. Since April 2018, additional flights are  planned in the direction of Yerevan - Tel Aviv - the frequency of  flights will be increased from 2 to 4 per week. The air carrier also  flies to Rome (in winter), as well as to Larnaca, Corfu, Venice,  Thessaloniki, Heraklion. In 2018, scheduled flights to Barcelona.  Since March 2018, the cities of Baghdad and Erbil will be added to  the list, and next summer charter flights to Bulgaria and Varna will  be expected. In April 2018, the delivery of the Embraer 190 aircraft  to 110 seats (2009) is planned. Upon the arrival of the aircraft, it  is planned to start direct flights to Europe. Since April 19, 2018,  scheduled flights to Lyon and April 23 in Cologne (twice a week). The  management of the airports of these cities went to meet the airline,  setting a discount of 50%. The Yerevan airport is also ready to  assist "Armenia" in making flights to Europe.

Nevertheless, as of today, flights to Moscow remain the prerogative  of Russian air carriers. In the winter period, 14 flights a day from  the airport are carried out from the airport, in the summer - 17.  "Armenia" made an attempt to enter this market in 2016, from June to  October carried out flights, after it had to suspend flights. "In  this direction, there are very unequal conditions, according to  Russian legislation, not the national carrier pays several times more  expensive than the Russian carrier," Hovhannisyan said. Thus, he  explained, every 100 km for an Armenian carrier costs $ 100, and for  the Russian - $ 27, not to mention airport fees and fuel tariff.

Today, the airline employs 44 people. In 2017, "Armenia" commissioned  two commanders of the ship, retrained 6 second pilots. The main fleet  of the airline today consists of the Boeing -737-500 registered in  Armenia, as well as two Boeing 737-700s and two Embraer 190s, based  on the agreement with Georgian Airways, despite the fact that the  business- the plan was calculated for 6 aircraft.