The first Ashgabat-Yerevan flight was greeted with a water salute 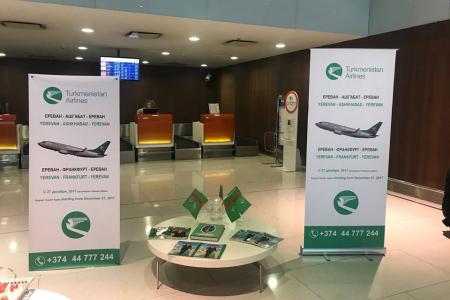 ArmInfo. The first flight from Ashgabat to Yerevan today landed at the international airport "Zvartnots", where it was traditionally met with a water salute. ArmInfo was informed about this in the General Department of Civil Aviation of Armenia.

The "Turkmen Airlines" was the first to use the fifth degree of "freedom of air" on the scheduled Ashgabat- Yerevan regular flight, since the flight from the Armenian capital will be continued to Frankfurt. 96 passengers were the first to fly from Ashgabat to Yerevan.

The "Turkmen Airlines" delegation arrived in Yerevan, headed by the deputy director of the airline Durdyn Suleiman Durdiyevich, who in a conversation with journalists stated that the flight opening was waited for a long time. At the same time he expressed the hope that this direction will be very popular and will be long-term.

The head of the GDCA Sergey Avetisyan stressed that every new flight to Armenia is definitely a positive step. At the same time, he stressed that the flight from Ashgabat to Yerevan was in demand and this issue was discussed many times.

Ashgabat-Yerevan-Frankfurt flight will be operated by the Turkmen Airlines once a week, every Wednesday.