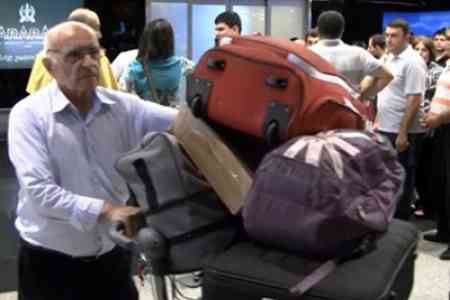 ArmInfo. The German Society  for International Cooperation (GIZ), within the framework of the  program "Economic Integration of Syrian Refugees in Armenia", which  started in November 2015, sent 2.5 million EUR to assist Syrian  Armenians in the issue of social and economic integration.

On January  23, Firdus Zakaryan, head of the staff of the RA Ministry of Diaspora  informed the journalists on the margins of the final event timed to  the results of the program.

He noted that within the framework of the program a working group of  24 members was created under the chairmanship of the RA Ministry of  Economic Development and Investments, which worked on solving the  problems of Syrian Armenians, from household to business assistance.  In general, about 3,100 Syrians (entrepreneurs and job-seekers) were  assisted, who took part in exhibitions held both in Armenia and  abroad. In addition, the beneficiaries of the program had the  opportunity to participate in various business forums, training  seminars aimed at increasing financial literacy, developing skills,  in particular, in marketing, business management, etc. According to  him, to date, Armenia resides about 20-22 thousand Syrian Armenians.  "However, in recent years, more and more Syrian refugees have  returned to Syria, and less and less arrive in Armenia. For example,  in 2017 only 170 people arrived from Syria to Armenia, "he said.

For his part, Ambassador Extraordinary and Plenipotentiary of Germany  to Armenia Matthias Kiesler noted: "In fact, Armenia has done a  tremendous job, having accepted over 20 thousand Syrian refugees,  many of whom have arrived empty-handed, but with many ideas that have  become novelty for Armenia.  According to the Ambassador, this  program implemented by GIZ is only part of a larger program that will  help create a more stable economic environment in Armenia. Speaking  about the beneficiaries of the program M. Kiesler stressed: "Syrian  Armenians created business opportunities not only for themselves, but  for the entire Armenian public, having formed a kind of business  environment in Armenia."