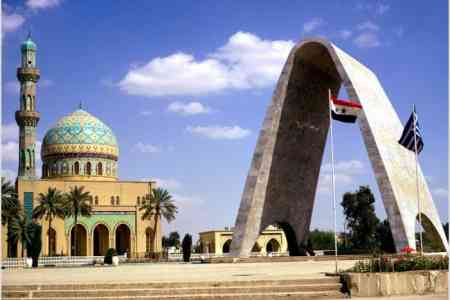 ArmInfo. Armenian Minister of Finance Vardan Aramyan discussed with the delegation of the tax authority of the Republic of Iraq the prospects of signing an agreement on the exclusion of double taxation on property and income on February 19 in Yerevan.

As the press service of the Armenian Ministry of Finance reports, the basis for concluding such an agreement was an increase in the specific growth of trade with the Iraqi side by 2.7%. According to Deputy Minister David Ananyan, the figure is quite impressive. In addition to the expectations for the growth of bilateral trade, the representative of the Ministry of Finance noted that reaching an agreement on this issue will form a more balanced tax policy and will also assist in strengthening business ties between Armenia and Iraq.

"The talks on the signing of an agreement on the exclusion of double taxation scheduled from February 19- 22 are the stage of the pre-conclusion of the document, according to which the interstate signing of the agreement is planned," the Finance Ministry said.

Today Armenia has similar agreements with 47 countries, the last agreement was signed in 2017 with Israel. The purpose of these agreements is to eliminate double taxation in trade between two states, to avoid tax discrimination with respect to economic entities of the parties, to exclude double taxation on property and income, and to create a predictable and stable tax environment for business. Meanwhile, the new program of the Armenian government for 2017-2022 as part of a consistent increase in the potential for economic growth and ensuring macroeconomic stability, promoting interstate trade and cross-border operations in 2019-2022 plans to conclude similar agreements with at least 5 countries.