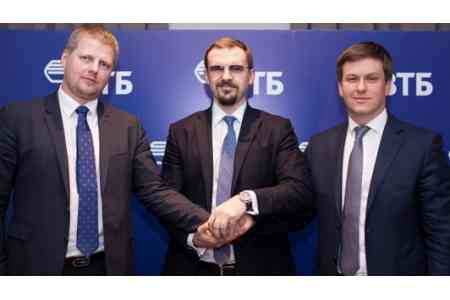 ArmInfo. Within three years, VTB Bank (Armenia) intends to become the first bank in the country. "Our plans are rather ambitious, but very realistic, based on the slogan" First Bank in Armenia "- in terms of size and importance of business, advanced technologies, team competence, product appeal, growth and profitability shoulder of the VTB team, "- said during a press conference on February 21, a member of the Board of the VTB Group, head of the Council of Armenian daughter Vladimir Verkhoshinsky.

Referring to the results of the meeting at the Central Bank, he noted that VTB sees the need for active business development in Armenia. "We intend to intensify actions to position the model of a universal bank that serves both individuals and legal entities." The foundation for this has already been created, there is support for management, and there are no obstacles for business growth in the next couple of years at least twice. "This will be ambitious and motivating task for the team, and the result is capable of generating significant profits for the bank, "he said, in which he said that in 2018 the bank faces the task of increasing liabilities by 25%, the portfolio of classic consumer goods loans - 45%, the loan portfolio as a whole - 16%, with a projected market growth of 10%.

Answering the question of ArmInfo about the reasons for the low growth in corporate lending both in VTB (Armenia), and on average in the market and the assessment of related risks, Yuri Gusev, Chairman of the Directorate, leaving the post of the Director General of VTB Bank (Armenia), said that, in view of the sanctions imposed on 2014, the Bank transformed the structure of the business in terms of attracting and working in the corporate market. According to him, the crisis phenomena in the economy of the Russian Federation, which had an impact on Armenia, prompted the VTB team to reconsider the appetites for the corporate business of the RA towards a more conservative approach. However, today's trends in economic development, in his opinion, prompted the Bank's team to reconsider the strategy for the corporate bloc.  "The business model of the Bank will be universal, as part of VTB Group with great traditions and a serious financial leverage, we need to develop both business lines in Armenia, I think in the near future you will see not only a formally stated strategy, but real actions. 2018 will be the starting point for a new strategic model of VTB Group in the corporate business in Armenia, "he stressed. According to Y. Gusev, today there is a tendency to reduce risks. He explained: "It was much more disturbing to enter the corporate lending market in 2015. Today, the economic situation in Russia, an important market for Armenia, is predictable, stable, manageable, with more understandable dynamics and clear new business models."

Speaking about the results of 2017, Gusev noted that the Bank retained leading positions in the retail business, exceeding the plan in this block by 6 times, with operating profit at the level of 10 billion drams.  "This is a record figure for Armenia," he stressed. In addition, Gusev noted that today VTB Bank (Armenia) is the absolute leader in the card business market with a share of about 30%, and the same specific weight is retained by the coverage of the ATM network. "In this segment, we are the main market maker in Armenia," he stressed. To date, according to him, the bank serves about 385,000 customers in Armenia. At the same time, VTB Bank (Armenia) managed to increase the loan portfolio by 15% - up to 90 billion drams, while demand deposits of natural persons - by 30%. In general, deposits of individuals (on demand and urgent) amounted to about 115 billion AMD. The card portfolio of individuals grew by 15%, consumer loans - by 70%.

According to the "Financial Rating of Armenian Banks" as of December 31, 2012, prepared by IC ArmInfo, the assets of VTB Bank (Armenia) 216.1 billion AMD, credit investments - 171.5 billion drams, retail lending - 90.4 billion AMD. Total liabilities of the Bank were 175.4 billion AMD, in the structure of which 56.4% fell to the share of time deposits - 98.9 billion AMD, of which 85.6 billion AMD is the funds of natural persons. (The calculated exchange rate of AMD as of December 31, 2017 was 484.10 AMD / $ 1).  "VTB Bank (Armenia)" JSC became a participant of the international financial group VTB in April 2004.  At present, VTB Bank, the second largest bank in Russia, owns 100% of VTB Bank (Armenia). The Bank is traditionally one of the leaders of the banking system of the Republic of Armenia in terms of key indicators. VTB Bank (Armenia) holds the first place in the coverage of the branch network - 67 units with presence both in the capital and in all regions of the country.