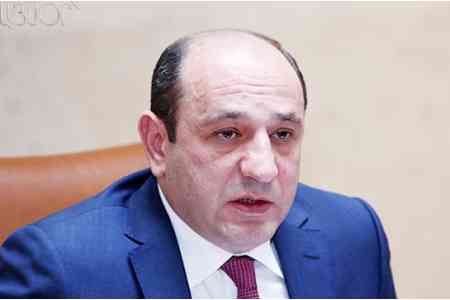 In particular, the press service of the Ministry of Economic  Development and Trade of Armenia reports that the sides touched upon  the results of joint efforts aimed at developing bilateral economic  relations, as well as forthcoming work in this direction.

The Iranian Ambassador to Armenia noted that the visa-free regime  between the countries contributes not only to the growth of tourism,  but also stimulates business ties. In this context, the Iranian  ambassador noted the exemption from payment of the customs duty for  passenger cars at the entrance to Armenia.

The sides also discussed the possibilities for expanding the presence  of Iranian business in Armenia, as well as ways to stimulate the  involvement of Iranian partners in FEZ Meghri. Suren Karayan  confirmed the willingness of the Armenian side to become an effective  platform for Iranian entrepreneurs to enter the markets of the EAEU  countries. It was noted the importance of steps for the Armenian  business to enter the Iranian market.