In 2018, the volume of investments in the Shirak region of Armenia will be 36 billion drams 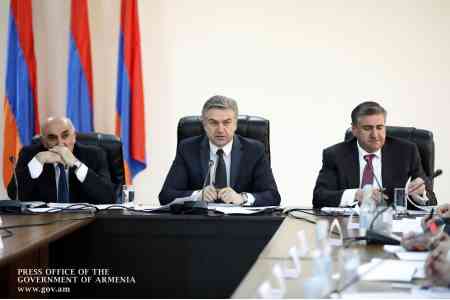 ArmInfo. In 2017, 22 billion  drams were invested in Shirak region of Armenia. This was announced  to the Prime Minister Karen Karapetyan by the Governor of the region  Artur Khachatryan.

According to him, according to the press service of the government,  the volume of investments in 2017 exceeded the indicators of 2016 by  10.6 billion drams. It is planned that this year investments in the  economy of Shirak region will be brought up to 36 billion drams. The  governor assured the prime minister that a significant portion of  investment programs will be implemented through private investments.  As a result, it is expected that the volume of investments per capita  from 92 thousand drams in 2017 in 2018 will increase to 152 thousand  drams. Artur Khachatryan reported that in the field of the number of  working people was 23517, it is planned to bring this figure to 23  thousand in 2018. A significant number of jobs will be created in the  light industry, in the service sector and information technology.

Artur Khachatryan also reported that in 2017 the implementation of  revenue items in the budgets of the communities of the region was  97%. Compared to 2016 year, the personal incomes of the communities  increased by 17%, which per capita in the region amounted to 8,100  drams against 9400 drams in 2017. This year it is planned to increase  this figure to 10,800 drams.

The Prime Minister stressed the importance of the steps taken to  increase the incomes of the communities of the Shirak region, calling  for parallels with other areas, while clarifying the statistical  indicators. "We are implementing the institution of the  administrative register, in the region there will be action by the  couture groups that will engage in statistics.The heads of the  communities will propose solutions aimed at providing partners with  relevant statistical data.In this direction, it will be necessary to  work closely with the communities for 2-3 years with several  departments, providing relevant information.Those communities that  provide more significant growth will receive funding, which is  important from the point of view of motivation, "- ska al Karen  Karapetyan. At the same time, the head of the Armenian government  instructed to revise the budgets of local authorities. "This is the  only way we can move forward." Our community leaders believe that an  increase in budget revenue plans will become a burden for citizens,  but subsidies will be given to those communities that will collect  more income. "The more we do it, we will render greater assistance to  that community," Karen Karapetyan.

The governor of the region said that in 2018 it is planned to  increase the budgets of local self-government bodies by 13%, which  will total 303 million drams. Speaking about problems with garbage  collection, he noted that in 2017 228 landfills were closed, another  257 will be closed this year. Artur Khachatryan stressed that a visit  to the region of investors from Sweden is expected, with which it is  planned to discuss the program of construction of a waste processing  plant. 1972 contracts were concluded for the cleaning of garbage with  individuals and legal entities. In the region, the number of legal  entities is only approaching 3 thousand, and the task is set in 2018  with all legal entities to conclude the corresponding contracts.  "There should not be legal persons who would not pay money for  garbage collection, we are not going to take more of them from them,  they just have to pay for garbage collection," the prime minister  said. It was also reported that 411 million drams were spent for  garbage collection last year in the region, and 190 million drams  were collected, 95 million of them from individuals. In 2018, raise  fees for garbage collection up to 263 million drams.