Armand Arton: The question whether citizenship should be granted in  return for investments is rather rhetorical 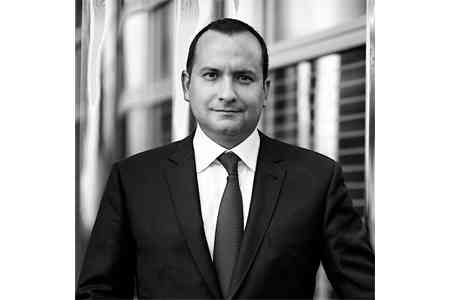 ArmInfo.Citizenship by Investment (CBI) is a concept widely practiced all over the world. For the first time, representatives of Arton Capital, a company registered in  Canada, specializing in citizenship programs through investments,  spoke about it in Armenia in May 2017 at a meeting with the former  head of the Ministry of Economic Development and Investments.

The company then prepared a report in which, among other issues, noted  that even with a low price of an "investor's visa" of $ 50,000,  within six years Armenia can earn about $ 140 million. Meanwhile, the  question remains open when Armenia can enter the elite club of  countries offering foreigners the opportunity to apply for  citizenship by investment - quickly, profitably and legally. ArmInfo  correspondent appealed to Arton Capital President Armand Arton for  clarification.

Mr. Arton, in 2017, after your meeting with the Minister of Economic  Development and Investments of Armenia, the ministry issued a message  that cooperation with Arton Capital will contribute to attracting  foreign investment. Has any progress been achieved in implementation  of this idea?

The "Arton Capital" company was selected on the basis of a tender  under the "Support to Migration and Border Management" program. In  May 2017, representatives of the company visited Armenia at the  invitation of the International Center for Migration Policy  Development (ICMPD - an international organization headquartered in  Vienna), which, with EU funding, implemented this program in Armenia.

In September of the same year, Arton Capital prepared a report on the  "Granting citizenship in exchange for investments" project for  Armenia. The document presented the key elements of the program, the  strengths and weaknesses of the project, also presented strategies  for mitigating risk factors. We made recommendations in order to  attract foreign direct investment in exchange for obtaining permanent  residence and citizenship. We also proposed the model and the form,  the structure of this possible program.  This was our final task for  this project. By the way, Arton Capital donated the entire fee for  the services to the Red Cross Society of Armenia, due to which two  groups of children from refugee families were sent to summer camps in  Tsakhkadzor.

A generous action, indeed! After your May meeting at the Ministry of  Economic Development and Investments, there was a feeling that the  concept of the "citizenship by investments" program received the  support of the authorities. The ministry called your company an  experienced organization with representative offices in more than 15  cities, saying that you managed to attract more than $ 3 billion of  investments within similar projects. Meanwhile, today it is not known  when it will be implemented and whether it will be implemented at  all?

The incumbent government does not show much interest in it. At the  same time, the company understands that in 2018 a "velvet revolution"  and a peaceful change of government took place in Armenia, and the  new Cabinet would have to decide whether to launch the project or  not. We see that the "Citizenship by Investments" mechanism is not  the main priority of the new authorities. At the same time, we  remember that Prime Minister Nikol Pashinyan declared the economic  revolution and the attraction of foreign investors to be the priority  of his new government. And in this light, one should understand that  the program proposed by us is an efficient mechanism for attracting a  new type of investors in Armenia.

Could you explain "citizenship by investment" mechanism? Who is this  type of new investor?

There are wealthy people who buy real estate, yachts, and there are  those who buy citizenship for greater mobility for the purposes of  tourism and business. By launching the program following the example  of many other states, for example, Cyprus, Portugal and Malta,  Armenia will be able to offer attractive immigration opportunities to  foreigners from third countries in exchange for purchasing real  estate and other investment options.

As practice shows, most of all investors come from Asian countries  and 50% of them from China. The second largest market (30%) is the  Middle East: these are investors from a wide geographic range - from  Morocco to India. Consumers of 15-20% of the market of "visa  investors" are representatives of the countries of the former Soviet  Union. Regarding Armenia, we think that wealthy people from the  Middle East are ready to invest in the Armenian economy for the  simple reason that the republic is located not far from the region  where political instability prevails. And, by the way, many of them  are Christians, and will feel safe in Christian Armenia.

Countries offering such programs require that foreigners make  investments of various levels  to obtain citizenship. Despite the  fact that the report itself does not speak about a specifically fixed  price, our company offered a certain tariff range "from" and "to".  That is, when entering the Armenian market it would be reasonable to  focus so far on a small amount of $ 50 thousand as the minimum  investment amount for a foreigner who wants to get a passport of a  citizen of Armenia. According to the report, even with such a low  threshold, the Armenian economy will receive additional income in the  amount of over $ 100 million within 3 years.

For this, experts recommended the Armenian government to offer  potential foreign investors two investment options: a direct  contribution to the state fund of $ 50,000 (non-refundable), or a  contribution of $ 100,000 to government bonds at zero coupon, that  is, at a zero rate. An investment of $ 100,000 in "equity", that is  in the authorized capital of a government-selected asset management  company is also possible, with the possibility of obtaining  investment benefits. In addition, the company offers Armenia to  introduce two types of commission fees. The first is a non-refundable  service charge of up to $ 10 thousand. And the second, without  specifying the amount, must cover the costs of checking the previous  activities of applicants for citizenship and their sources of income.

In order to understand how profitable it is for the state, I would  say that the rate on government loans in foreign markets averages 7%,  and with a zero coupon, the authorities will save on interest.

Currently, Arton Capital is also promoting the Global Citizen Tax  initiative, lobbied in the EU countries, which is aimed at  establishing an additional tax of 5% on investments for "visa  investors", which will be further focused on solving problems with  refugees. Thus, the money of wealthy clients would help less wealthy  ones. In Armenia, this is also a sensitive issue given the  integration of compatriots arriving from troubled Syria.  Can our  government, in your opinion, control this process in view of its lack  of experience and practice?

The Armenian authorities should not have concerns due to the  establishment of a certain tariff corridor in the form of investments  for applicants for an "investor passport", as well as the existence  of strict selection criteria. Of course, it is necessary to take into  account the presence of a number of risks for the investor himself -  closed borders with neighbors - Azerbaijan and Turkey, the conflict  over Nagorno-Karabakh, corruption that has not been eliminated  completely yet.

But there are also positive moments, since on the existing  list of  "good news" - close ties with world economic centers, as well as  geographical and cultural proximity to strategic markets (EAEU, IRI),  such a "brand" as the Armenian "velvet revolution" and a peaceful  change of power in the country can aslso be added.

The democratic processes in Armenia allowed the international  community to take a new, more positive look at the republic. This is  one of the reasons why we decided to hold the Global Citizen Forum in  Armenia this year. And if Armenia also agrees on a visa-free entry  into the Schengen zone, the Armenian passport will drastically  improve its position in the global passport index.

In your opinion, which model is more acceptable for Armenia?

The choice of the program implementation model is an exclusive  prerogative of the government of Armenia. For my part, I can assure  you that, whatever you choose, I, as an Armenian, will be proud and  happy with any scenario and role that the Republic of Armenia will  define for Arton Capital. We do not in any way try to emphasize our  role or monopolize the market.

The program can be managed directly by the authorities of the  country, employing a reputable and professional operator with  experience in the field of investment immigration who is able to  ensure its successful and stable operation. In addition, we even  strive for competition, because we believe that this will ensure the  transparency of the whole procedure. In this context, we are  currently working with European lobbyist organizations that promote  the idea against the concentration of services in this area in the  hands of one company. For example, verification of the data of  potential clients, designed to provide the project with maximum  protection against surprises, our company conducts with reputable  American, British and Canadian partners, who check both the investors  themselves and the sources of the origin of the funds.

Mr. Arton, you have mentioned citizens of the Middle East countries  as potential players at the Armenian "blue passport" market? Are  there any grounds for concern in the context of national security?

Any candidate for citizenship under this mechanism undergoes a strict  "filtering", his background is studied from the moment of birth until  the moment of submission of documents. His financial situation is so  thoroughly verified that it is easier for a dubious person to obtain  refugee status in the country than to become a beneficiary of the  program. So, without a shadow of a doubt, I will tell you that there  is no cause for concern.

Besides, when Arton Capital started negotiations with the government  of the Republic of Armenia Moldova didn't even think about launching  such a program. We advised the Government of the Republic of Moldova,  and for several months now the country has launched it. We are also  negotiating with the Government of Georgia about the implementation  of a similar program. Already more than 10 countries, from the  Pacific to the Caribbean, are currently consulting with Arton Capital  on the mechanisms for implementing such programs. Recently, Arton  Capital was one of three companies approved by the government of  Montenegro for the implementation of its citizenship investment  program in exchange for investment and its promotion in the  international market. Indeed, in our rapidly developing world, the  one who responds in time and concentrates resources on key areas  wins.