In the insurance market of Armenia, the corporate component dominates  in premiums, and retail 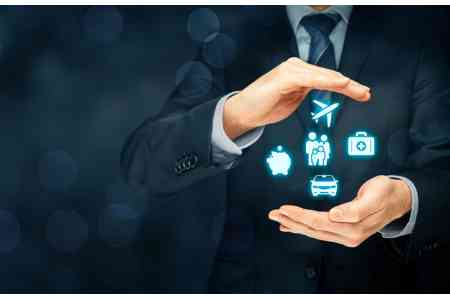 ArmInfo. The share of retail insurance in the portfolios of premiums of Armenian insurers in the first half of 2019 amounted to 44.1% (11.6 billion drams), corporate  - 55.9% (14.7 billion drams), against almost similar figures a year  earlier - 44.7% and 55.3%, respectively. According to the data of the  Financial Rating of insurance companies of Armenia, prepared by  ArmInfo Investment Company, the retail insurance market capacity  accelerated annual growth to 18.1% from 6% in the first half of 2018,  along with which the growth of corporate insurance slowed  significantly from 58.2% to I half of 2018

In the first half of 2019, corporate insurance prevails in the  premium portfolios of all insurers, with the exception of RESO and  Armenia Insurance, where retail insurance prevails - 62.7% and 58%  respectively.  The largest disproportion between corporate and retail  insurance was recorded in INGO Armenia (65.6% and 34.4%) and Sil  Insurance (59.5% and 40.5%). The remaining three companies have a  moderate disparity between corporate and retail insurance: IC  "Rosgosstrakh Armenia" - 54.1% and 45.9%, IC "Nairi Insurance" -  52.1% and 47.9%.

In the structure of insurance claims, the share of payments to retail  customers accounted for 68.5% or 8.1 billion drams, corporate - 31.5%  or 3.7 billion drams, against 66% and 34% respectively a year  earlier. At the same time, compensation to legal entities  dramatically slowed the annual growth from 55% in the first half of  2018 to 2% in the first half of 2019, with a moderate slowdown in the  upward trend of payments to individuals - from 26% to 14%. The  largest disproportion in reimbursement between retail and corporate  insurance was recorded in the reporting period with IC "Rosgosstrakh  Armenia" - 90.8% and 9.2%, and the smallest with IC "INGO Armenia" -  51.3% and 48.7%.

In the structure of premiums listed for reinsurance, the share of  corporate insurance was 93.2% or 3.8 billion drams (with an  acceleration of annual growth from 13% to 82%), retail - 6.8% or  272.4 million drams (with a slowdown in annual growth from 55% to  37%). A year earlier, in the first half of 2018, the share of  corporate insurance in premiums listed for reinsurance was 91.2%, and  retail insurance - 8.8%. The largest disproportion between corporate  and retail insurance in premiums listed for reinsurance was recorded  in Armenia Insurance IC - 97% and 3%.  Armenian insurers for the II  quarter of 2019 concluded 417,671 contracts, exceeding the number of  contracts a year ago by 40.8% (against 17.4% growth a year earlier).  Thus, the number of insurance contracts valid on July 1, 2019 was  989074 with an annual growth of 24.5% (against 19.8% growth a year  earlier). Among classes, the leading position in terms of the number  of contracts held by CTP is in the second quarter over 278.1  thousand, the number of existing contracts under which as of July 1  reached 527.2 thousand. Of the voluntary types of insurance, the most  in-demand insurance is accidents, in the second quarter, 81.4  thousand contracts were concluded, and the number of actives on July  1 reached 288.5 thousand. By the number of contracts in the segment  of OSAGO, Rosgosstrakh Armenia Insurance Company leads (138.3  thousand effective on July 1, of which 67 thousand were concluded  quarter), and the same compan It dominates health insurance (36.5  thousand operating on July 1). INGO Armenia is the leader in accident  insurance (146 thousand operating on July 1), holding the  championship and property insurance (25.4 thousand operating on July  1). On hull insurance took Nairi Insurance (5,1 thousand operating on  July 1). In insurance of those traveling abroad, the leader in terms  of the number of INGO Armenia contracts: valid on July 1 - 5.8  thousand prisoners in the II quarter - 7.1 thousand In terms of the  number of contracts concluded in the second quarter, INGO Armenia  insurance company regained leadership - 127.4 thousand, displacing  Rosgosstrakh Armenia insurance company to the second position - 99.8  thousand, and Nairi Insurance returned the third position - 58 8  thousand, on the fourth advanced IC "RESO" - 56.9 thousand, pushing  the fifth IC "Sil Insurance" - 39.1 thousand, and closes the list  Armenia Insurance - 35.7 thousand. All six companies have a dominant  The contracts concluded fall on compulsory motor TPL insurance with a  maximum for Armenia Insurance (89%) and a minimum for INGO Armenia  (54%).  Recall that in the insurance market of Armenia there are 6  companies operating from the existing 20 classes of 17, with the  exception of railway transport insurance / liability from use and  insurance of legal and extrajudicial expenses. Moreover, from 2019 in  the financial reports on the portfolio of all 6 insurance companies  at the request of the Central Bank of Armenia was added a line of  seismic risk insurance (against earthquakes), the data on which,  although separately stated, are not included in the results, since  they are already included in the relevant insurance classes.  By the  largest number of classes, INGO Armenia ICs are licensed - 16 (the  only one working in the water transport insurance class) and  Rosgosstrakh Armenia IC - 15, followed by Nairi Insurance IC and  Armenia Insurance IC - 12 classes each, SK RESO and Insurance Company  "Sil Insurance" - 11 classes each.  (Estimated dram rate to dollar on  06/30/19 is 477.11 others / $ 1).