Siluanov: EAEU will decide on duties after discussion at the national  level 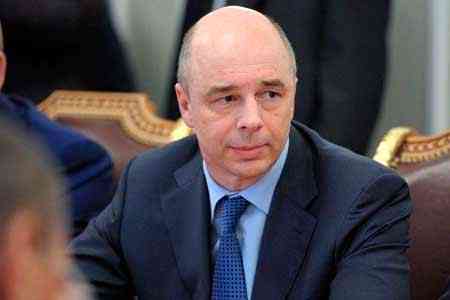 ArmInfo. The countries of the  Eurasian Economic Union took a break of 10 days in order to evaluate  the proposals on import duties. This was reported to reporters by the  First Deputy Prime Minister of the Russian Federation, Minister of  Finance Anton Siluanov, TASS reports.

"We brought the positions closer, took a break for 10 days in order  to work out proposals that have arisen at the national levels," said  Siluanov, answering the question about the decision on fees.

On August 9, a meeting of the Eurasian Intergovernmental Council  takes place in Kyrgyzstan. The meeting's agenda includes issues of  integration interaction in the Eurasian Economic Union, the  development of supranational regulation within the EAEU. It is  supposed to give priority attention to the formation of the common  financial market of the union and the development of promising  initiatives in the field of industry and the digital economy.

During the meeting, it is planned to sign an agreement on the  transboundary movement of hazardous waste through the customs  territory of the Union, a protocol on amendments to the Treaty on the  Joint College of Customs Services of the Member States of the Customs  Union of June 22, 2011, and also approve the concept of transboundary  information exchange within the EAEU.

To recall, in May last year, the Armenian parliament ratified the  protocol "On the application of certain provisions of the Treaty on  the Accession of the Kyrgyz Republic to the Treaty on the Eurasian  Economic Union of May 29, 2014, signed on December 23, 2014." The  document provided for a change in the shares in the distribution of  customs duties between the EAEU countries. According to these  changes, the share of Armenia increased from 0.11% to 1.22%, the  share of Belarus was 4.56%, Kazakhstan - 7.055%, Kyrgyzstan - 1.9%,  Russia - 85.265%. In 2015, Armenia transferred 35 billion drams to  the "common boiler", and received 55 billion drams; in 2016, 52  billion drams were received, with a deduction of 34 billion drams.