Tian Erlong: Armenian honey will be in demand in the Chinese market 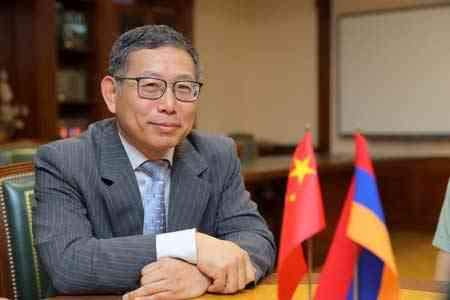 ArmInfo.Chinese Ambassador to Armenia Tian Erlong is convinced that Armenian honey will be in demand in the Chinese market. At the festival of honey and berries in  the city of Berd, Tavush region, to the question of ArmInfo  correspondent, whether Tavush honey has been tried in China, given  the popularity of this product among Chinese consumers, and the fact  that one of goods supplied by the RA to the PRC is honey, the  Ambassador noted that the process is just starting.

"I think that if the market opens, it will be huge, very capacious.  You know that in May this year, Chinese Foreign Minister Wang Yi  visited Armenia. During this visit, an intergovernmental agreement  was signed on visa-free mutual trips of citizens of the two  countries, as well as the protocol on the quality parameters of honey  imported from Armenia. Therefore, I think this is a good opportunity  for Armenian agricultural products to enter the Chinese market, "  the Ambassador said.

Meanwhile, when asked to clarify how the liberalization of the visa  regime will affect the tourism sector of the two countries the  diplomat noted that the procedures for ratification of the document  have not yet been completed. "But, I think that they will soon be  completed in Armenia, in our country they are actually completed. I  believe that this year the agreement will come into force, and this  will certainly contribute to increasing tourism exchange and  cooperation between our countries," the Ambassador of PRC said.

In this context, he noted that this year, as well as over the past  few years, there has been an increase in the number of Chinese  tourists traveling to Armenia. According to him, this is due to  facilitated entry procedures, Armenian hospitality, and the  magnificent nature of Armenia. Erlong is convinced that all of these  factors are very attractive for a foreign tourist, especially from  China.  As ArmInfo previously reported, Armenia and China introduce a  visa-free regime. At the meeting of July 11 this year, the Government  of the Republic of Armenia approved for ratification the draft of the  relevant agreement, which will be forwarded to the National Assembly  of the Republic of Armenia in the established manner. The parties  declared their readiness to develop these relations by signing an  agreement allowing citizens of the two states with ordinary passports  and without visas to be in each other's territory for 90 days.

To note, back in 2015, the volume of export of Armenian honey to  China amounted to only $ 90 thousand in monetary terms, and in 2016  the PRC imposed a ban on its supply due to non-compliance with the  required standards. In 2017, the Armenian Ambassador to China, Sergey  Manasaryan, said that the Armenian side took this circumstance into  account and managed to undergo the necessary certification  procedures, as a result of which the supply of honey should resume. A  preliminary permit agreement was signed.  According to the RA Customs   Service, in 2018 Armenia reduced the export of honey by 37.9% to  34.4 tons. At the same time the customs value decreased by 25% to $  259.4 thousand. Mostly, the entire volume of exported honey falls on  the US market (85%), the rest is distributed between Russia (5.5%),  the United Arab Emirates (2.3%), Belgium (1 ,7%), Lebanon (1.1%).   Only 0.3% of total exports are supplied to China.

At the same time, positive dynamics is observed in terms of honey  imports. In particular, the volume of imported honey increased by  53.3% to 21 tons, while the customs value increased by 53.3% to $  108.2 thousand.  Ukraine is the main import market (96.2%).  It  should be noted that the Statistical Committee of the Republic of  Armenia provides no data on honey production.