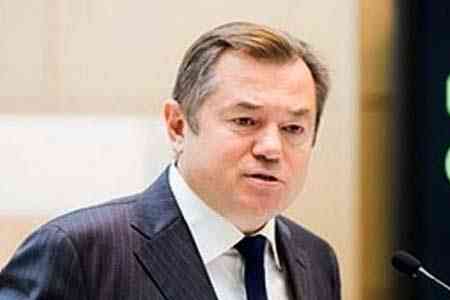 ArmInfo. Advisor to the President of Russia Sergey Glazyev will become the new Minister for Integration and Macroeconomics of the Eurasian Economic Commission  (EEC, supranational regulatory body). Glazyev's candidacy has already  been approved by the leaders of the governments of Russia, Belarus,  Kazakhstan, Kyrgyzstan, and Armenia. The presidents of the member  countries of the union should approve Glazyev at the meeting on  October 1 in Yerevan, the EEC press service reports.

A federal official explained to "Vedomosti" that Glazyev would not be  able to combine a new position with work in the presidential  administration. Spokesman for Vladimir Putin Dmitry Peskov did not  answer the question of "Vedomost"i. Glazyev will  replace Tatyana  Valova, who headed the UN headquarters in Geneva. Glazyev already  worked at the EEC, he was the executive secretary of the Commission  of the Customs Union (later it was transformed into the Eurasian  Economic Union).