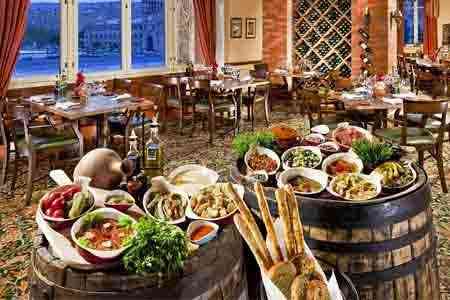 ArmInfo. Georgia, despite the suspension of direct flights with Russia, remained in the top ten most popular foreign destinations among Russians this summer,  however, Italy and Turkey entered the top three instead. This is  evidenced by research data from the OneTwoTrip travel planning  service prepared for TASS.

The first place among foreign destinations is occupied by Armenia for  the second summer in a row with an average 8.5% of all purchased  airline tickets. Italy and Turkey are also among the leaders , which  a year earlier occupied fifth and tenth places, respectively. At the  same time, previously Georgia also entered the top 3, direct air  communication with which was suspended from July 8, 2019. This  season, Georgia managed to stay in fifth place in the ranking "due to  the large tourist flow in June," the study said.

The top ten popular foreign destinations also included Spain,  Uzbekistan, Germany, Tajikistan, France and Kyrgyzstan. At the same  time, Moldova and Ukraine dropped out of the top 10.  In the summer  season, as a year earlier, Russian destinations were the leaders in  the number of air tickets sold. Moscow is in the first place,  followed by St. Petersburg, and Sochi in third place.  "Last year,  Samara and Yekaterinburg, where the World Cup matches were held, were  in the top 10 cities where the most air tickets were bought. In 2019,  these cities dropped to their usual places, but still remain in the  twenty most popular destinations for summer trips, "the study notes.   As for the resort regions, most often this summer, residents of  Russia flew to the Krasnodar Territory (Sochi takes the third place  in the ranking for the second year in a row, Krasnodar ranks fifth)  and the Crimea.