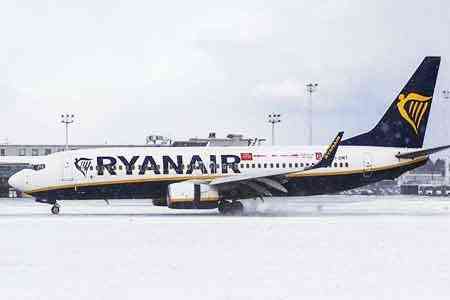 "Yesterday, on the shore of Sevan, in the rest house of the Union of  Artists, we together with head of the Civil Aviation Committee of  Armenia Tatevik Revazyan, held a meeting with Irish Ryanair low-cost  airline's Chief Commercial Officer David O'Brien and Director of  Route Development Kate Sherry.  We discussed issues related to the  possible entry of the company into Armenia," Avinyan noted.

To note, the Irish Ryanair airline is the largest low-cost airline in  Europe. Ryanair serves over 1600 destinations between 180 airports in  28 European countries and Morocco, making more than 1600 flights per  day. The main airport hub for the airline is London Stansted. The  busiest and most profitable airline flight is the London - Dublin  route.

At the beginning of this year, the low-cost airline reported a loss  of 20 million euro and related restructuring. According to the  organization's representatives, within four months four low-cost  airline divisions will be created: Laudamotion, Ryanair DAC, Ryanair  UK and Ryanair Sun, each of which will have its own management and  general director. The holding company was led by current Ryanair CEO  Michael O'Leary.

According to ArmInfo analysts, against the backdrop of the crisis  associated with strong competition with traditional carriers of the  Old World (Great Britain, Spain, Germany, Italy, Greece, Portugal,  Poland), Ryanair today is in dire need of new efficient markets. The  arrival of the company in Armenia will completely change the matrix  of aviation services in the country. Her arrival will undoubtedly be  opposed by traditional air carriers, which provide rather expensive  transit points to European hubs for Armenian passengers. The load on  the Russian carriers, which provide interline flights to European  destinations through Moscow airports, will somewhat decrease.