By the end of this year, EDB will sign two new loan agreements 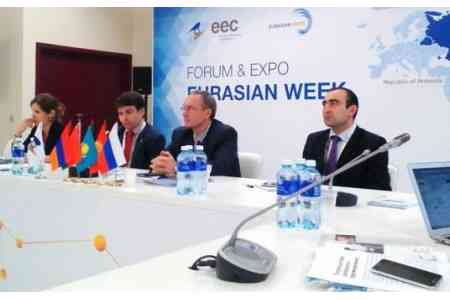 ArmInfo. By the end of this  year, the Eurasian Development Bank (EDB) will sign two new loan  agreements with two business entities.  Director of the EDB Office  for the Republic of Armenia Armen Melkikyan announced this on October  9 at a meeting with reporters, evading to name the companies,  directions and amount of appropriations.

According to Armen Melkikyan, the accumulated capital of the Bank in  Armenia is $ 208 million, the current portfolio is $ 90 million.  Moreover, there is a problem with the quality and activity of  applications in the republic. As of today, more than 15 applications  have been received by the EDB, most of which were rejected due to  their inconsistency with the quality and strategy of the Bank.  According to the EDB strategy, by the end of 2022, the volume of  accumulated capital in Armenia should increase from the current 4.2%  to 15%. "Of course, we want great results, and we will do everything  in our power to achieve our goals," Armen Melkikyan said.

He also said that the EDB is interested in financing large projects  in areas such as infrastructure and energy, including renewable  energy. Given the active development of this sector, the EDB is ready  to take part in this project, but at the same time it will not be  about small stations, but about solar generation facilities of at  least 30-40 MW. <Unfortunately, we did not have time to prepare for  the Masrik-1 project, but we are ready to take part in other  programs>, the head of the mission stated.

To recall, on October 1, on the sidelines of the meeting of the  Supreme Eurasian Economic Council in Yerevan, Chairman of the Board  of the Eurasian Development Bank (EDB) Andrei Belyaninov and Deputy  Prime Minister of the Republic of Armenia Mher Grigoryan signed the  Road Map for Investment Cooperation between the Republic of Armenia  and the EDB. As ArmInfo was informed in the EDB press service, the  developed Roadmap is a tool for implementing the EDB strategy for the  period until 2022. The document defines the main steps for  implementing Armenia's priority areas for developing cooperation with  the EDB. According to the report, the EDB sees opportunities to  strengthen its role in Armenia as an institution of development in  increasing the growth rate of investments in the economy of the  Republic, developing the country's export potential, developing human  capital and improving the quality of life of the population. These  priorities have identified key activities for the implementation of  the Roadmap, which focus on two main mechanisms: implementation of  existing and preparation of new projects, as well as interaction in  the field of technical assistance and development in the social  sphere.  EDB is an international financial institution established in  2006. Its founders are Armenia, Belarus, Kazakhstan, Kyrgyzstan,  Russia and Tajikistan. The authorized capital is $ 7 billion,  including paid up - $ 1.5 billion. As of October 1, 2019, the bank's  assets amounted to $ 5009 million, capital - $ 1833 million, the  current investment portfolio - $ 3935 million.