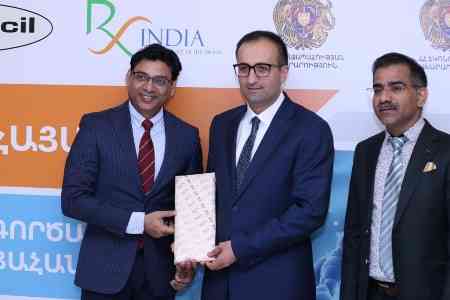 ArmInfo.  About 30 leading  Indian pharmaceutical companies demonstrate their products at the  Indian-Armenian pharmaceutical business conference - exhibition,  which is being held in Yerevan on November 11-13. The  exhibition-conference was organized by the Government of India, the  Embassy of India in Armenia and the Pharmaceutical Export Promotion  Council (PHARMEXCIL), established by the Ministry of Trade and  Industry of India.

At the opening ceremony of the event today, Ambassador Extraordinary  and Plenipotentiary of India to Armenia Kishan Dan Dewal noted that  Indian pharmaceutical companies see great potential for deepening  cooperation with their Armenian counterparts. <This conference is a  great opportunity to deepen the ties between India and Armenia in the  field of pharmaceuticals, which, I am sure, will be properly used by  Indian and Armenian companies. Indian medicines are already widely  available in the Armenian market.  Over 150 out of 5,000 registered  medicines in Armenia are produced in India. I hope that the  exhibition and conference will give impetus to new mutually  beneficial agreements that will provide Armenian consumers with an  even wider range of high-quality safe and effective medicines from  leading Indian manufacturers>, the ambassador said.

In turn, RA Minister of Health Arsen Torosyan welcomed the  representatives of Indian and Armenian companies participating in the  conference and wished them fruitful cooperation.  Abhai Sinh, senior  director of PHARMEXCIL, representing the pharmaceutical industry in  India, noted that his country is the world's largest supplier of  generic drugs. It accounts for 20% of global shipments. In India,  there are 3,000 pharmaceutical companies with a strong network of  more than 10.5 thousand manufacturing enterprises. The cost of  production in India is only a third of the cost of production of  similar drugs in the United States, and in Europe - almost half. The  specialist added that India is the source of 60,000 generic brands in  60 medical categories and produces more than 500 different active  pharmaceutical ingredients (APIs). The export of generic drugs is one  of India's strengths. In 2018-1919, pharmaceutical exports amounted  to 19.2 billion US dollars.