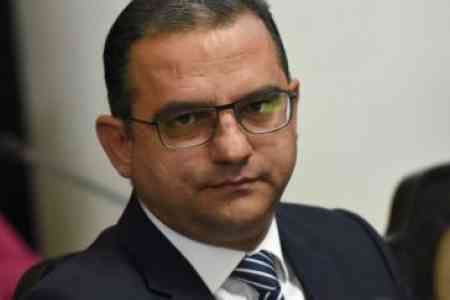 ArmInfo. Attracting several investors to Armenia represented by transnational corporations (TNCs) will allow the country to start playing for high stakes.  This  opinion was expressed by Minister of Economy Tigran Khachatryan in an  interview with ArmInfo's economic columnist.

According to him, to  achieve this it is necessary to ensure several important conditions  for the economy, among which the development of the capital market  must be put in the first place, without which large institutional  investors, including portfolio investors, will treat the country with  a considerable degree of caution. ''Some say: let's use domestic  savings and turn them into investments, and then we will think about  the public market capital. I do not agree with this. Internal savings  can be directed to the development of SMEs, to ensure self-employment  of the population. While foreign investors are important since they  think big and play big and their markets are large. That is, we must  create such conditions that several large investors organize their  own business in Armenia over the next few years,'' the Minister said.

The Minister agreed with the opinion that today it is necessary to  set up almost a zero threshold for strategic investors, and  especially TNCs, to enter Armenia. He expressed the idea that at the  current pace of technological development, Armenia, in fact, has  nothing to offer serious foreign partners. The opinion about the  possibility of the state reanimating old large "Soviet" enterprises,  once privatized and not working today, is not that relevant. This  involves big risks, as well as large and unjustified expenses.  However these enterprises have although poorly maintained but still  ready-made infrastructure, totaling 20-30% of capital investments,  which may, under certain conditions, be interesting for foreign  investors.

As one of such conditions, the possibility can be considered of  involving enterprises on the basis of the principles of  public-private partnership (PPP), where the state will take, for  example, 20% of the capital costs of establishing enterprises, and  the rest will be offered to be covered by the investor. Such a  practice, according to the Minister, when the state shares risks with  investors, exists in some countries experiencing an urgent need for  strategic institutional investors represented by international TNCs.  The Minister noted that today there is a very tough competition for  institutional investments in the world. To participate in this  competition, the state through its institutions must constantly  analyze strengths and weaknesses in order to invite investors to  certain sectors of the economy on certain preferential terms. To  implement such large- scale projects, the state needs to concentrate  certain resources - unused territories, funds and other assets useful  for business.

Another extremely important condition for inviting TNCs in the  country is the availability of appropriate human resources. "Of  course, Armenia has a certain personnel potential, but let's face  facts - does the level of our education meet these goals?'',  Khachatryan wondered. However, at the same time, the Minister  believes that there is no need to start from scratch since we  genetically took these capabilities from our ancestors, who once  worked on building Soviet Armenia, industrialized and technologically  advanced country for that time, as well as from our compatriots, who  have proven themselves well abroad. Therefore, he believes,  everything depends on serious transformations of the educational  system. ''If the educational system passes the adaptation period  correctly and provides knowledge that meets the requirements of the  21st century, then if not today, then in 5-7 years we will be able to  solve the problem of providing the economy with good young staff in  certain sectors and thereby help TNCs to make choice in favor of  Armenia'', he stressed.  Tigran Khachatryan believes that in Armenia  there is no need to fully "reanimate" the Law on Foreign Investments,  which was in force in the 1990s. ''Our legal regulations in the field  of protection of foreign investments, as recognized by international  organizations, including UNCTAD, are fully consistent with the best  international standards. We do not have any problems with legislative  guaranteeing the interests of investors'', the Minister emphasized.  There are no restrictions either in matters of currency regulation,  or in matters of the formation of share capital, or restrictions on  the formation of the governing bodies of foreign companies in terms  of citizenship. But from a fundamental point of view, the head of the  Ministry of Economy believes, in Armenia such tasks as the lack of a  developed capital market, an effective corporate governance system  have not yet been resolved, the depreciation policy needs to be  reviewed. Ultimately, the problem of the country's economy lies in  low productivity compared with the global average.

To recall, Armenia has worsened its position by six points in the  World Bank Doing Business ranking, dropping to the 47th place this  year from the 41st last year. When asked by RA Prime Minister Nikol  Pashinyan to comment on this at a government meeting on October 24  Minister of Economy Tigran Khachatryan noted that the deterioration  of positions was mainly due to both a change in the methodology for  assessing 10 research areas and the introduction of a new direction  related to the rating with the level of development of the stock  market, the registration of private companies on the stock exchange  and the turnover of shares. ''If these directions were excluded, the  republic would improve its position by 1.3 points, and according to  this indicator, the republic would be closer to the leading states of  the world'', the minister said.  In its studies, the WB first applied  a new assessment methodology, which is mainly related to the  protection of the rights of minority shareholders, including through  legislative reforms. The Minister recalled that the country's  parliament had introduced the necessary amendments to the law "On  Joint Stock Companies", which fully protected the interests of  minority shareholders.