Expert: Animal numbering and registration program to serve as basis  for other livestock projects 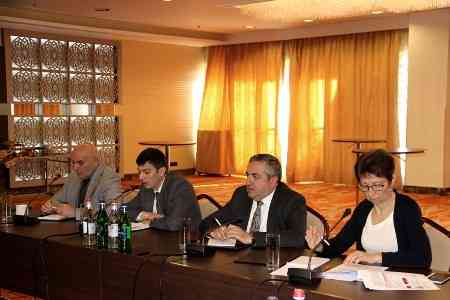 ArmInfo. The program of numbering and registration of animals will become the basis for the implementation of other programs, in particular in the field of  animal husbandry, veterinary medicine, food security, public health  of Armenia.

On November 20, answering the question of ArmInfo correspondent on the sidelines of a working meeting of the Ministry of Economy in Tsaghkadzor on the introduction of the numbering and accounting system for cattle in the Republic of Armenia, said  head  of this program Nazeli Grigoryan, which will be implemented in  Armenia by the Center for Agribusiness and Rural Development ( CARD).

"The program will become a kind of reader", she stressed, noting that  the system will include complete information about absolutely all  animals.

The expert said that within the framework of the program, a working  group was created, which included representatives of various  ministries, veterinary associations, CARD specialists and the RA Food  Safety Control Service. The program, she said, was developed for a  period of three years, and during this time the state will take upon  itself the financing for

At the same time, she noted that the program will be valid so far  only for cattle, the number of which in Armenia today totals about  570 thousand.

The budget for the preparatory phase amounted to 740 thousand euros,  and the total cost of the program for three years will reach about 6  million euros, some of which will be taken over by the Austrian  Development Agency (ADA) and the RA government. In particular, ADA  Deputy Office Manager and Programme Manager  Nora Alanakyan expressed  readiness on behalf of the Agency to assist in the implementation of  this program, while expecting the active participation of the RA  authorities.

During the meeting, the Deputy Minister of Economy of the Republic of  Armenia Tigran Gabrielyan noted that since the adoption of  independence to this day, no numbering of animals has been carried  out in Armenia. Despite the fact that pilot programs were implemented  in the Vayots Dzor, Syunik, Kotayk and Ararat regions, however,  according to him, a large-scale program was not carried out  throughout the republic due to technical problems and lack of  funding. , the deputy minister said.

In a conversation with reporters,  head of the Food Security Service  of the Republic of Armenia Georgi Avetisyan emphasized that it is  impossible to carry out full control in this area without introducing  a numbering and animal counting system. "It is very important that  this initiative exists, and we hope that cattle numbering will  already be carried out throughout the republic in 2-3 years," he  emphasized.

It should be reminded that back in 2017, the Ministry of Agriculture  of the Republic of Armenia presented a program for introducing the  system of identification and numbering of farm animals, which was  developed by the State Food Security Service of the Republic of  Armenia together with the Center for Agribusiness and Rural  Development (CARD) and other international organizations.

As a result of the implementation of the program, it was expected to  increase the efficiency of predictability of animal diseases and  ensure health, more efficient management of food security, breeding  of pedigree cattle, and expanding export opportunities.

It should be noted that according to the Statistical Committee of the  Republic of Armenia, in January- September of 2019 the gross  livestock production of the Republic of Armenia amounted to 250.8  billion drams, which is 2.2% less than the indicator of the previous  year. According to the RA Customs Service, in the first half of the  year Armenia increased the export of cattle by 2.4 times to 1340,  with the growth of customs value by 3.4 fold to $ 580 thousand. At  the same time, the opposite trend is observed in import. In  particular, during the reporting period, Armenia almost halved the  import of cattle (up to 215 animals), with a decrease in customs  value by 1.4% to $ 598.4 thousand.