Head of the Civil Aviation Committee of the Republic of Armenia: In  the near future, a new domestic one will appear on the Armenian air  transportation market Airline 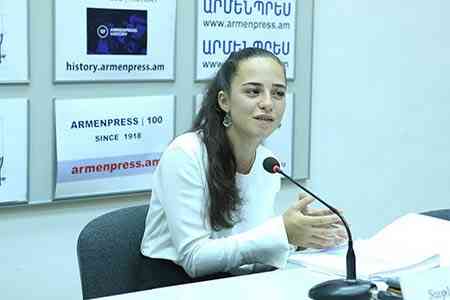 ArmInfo. In the near future, a new domestic airline will appear on the Armenian air  transportation market. On December 3, Tatevik Revazyan, Chairman of  the Civil Aviation Committee of the Republic of Armenia, informed the  RA National Assembly about this.

According to her, the airline submitted an application for its  registration with the RA Civil Aviation Committee. According to the  airline's business plan, flights will begin in the summer of 2020,  flights will be carried out in 13 directions. Thus, Tatevik Revazyan  continued, 41 flights will be operated per week. 388 thousand  passenger seats a year will appear, about 200 new jobs will open.

The Head of the Committee also reported that from December 12, 2019  and from January 2020, flights will begin to operate in new  directions.

Earlier, Tatevik Revazyan noted the intentions of RyanAir to begin  flying in 4 directions - two in Italy and two in Germany.

In addition, it is planned to expand routes in 3 more directions,  local and foreign companies have shown interest in the Armenian  aviation market. So, the Russian company Azimut has already announced  its intention to open an air route from Armenia to Kaluga and plans  to start flights from December 14th. The intention to launch a new  route was announced by AirBaltic, and the Wizz Air low-cost airline  has already agreed to the implementation of flights to Armenia, but  so far internally. "We have already received proposals to launch 8  new directions, but we expect that by the summer their number will  increase to 10," Revazyan noted. As ArmInfo previously reported,  Europe's largest low-cost airline RyanAir announced the launch of  flights from Yerevan and Gyumri. As David O'Brien, Commercial  Director of RyanAir, noted, the company starts its activities in  Armenia in three new directions. In particular, direct flights to  Rome and Milan will start from Yerevan on January 14, and to Berlin  from the end of March. The information was perceived very  ambiguously. The media reported that RyanAir agreed to fly to Armenia  after the RA authorities allocated approximately $ 5 million a year  to pay for airport taxes. The local airline Taron-Avia, which  recently announced that it was leaving the country's aviation market,  said it had requested the privileges granted by the government to the  Irish low-cost airline for many years.