First Deputy Finance Minister: The program "Public Finance Management  in the South Caucasus in 2017- 2020" in Armenia can be considered  successful 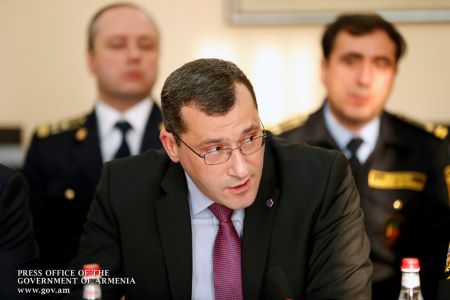 According to Brutyan, thanks to the program, it was managed to  develop the budget for 2019 and present in full in the format of  program budgeting. "There is no other more effective grading system  than matching plans with actual work," he said.

Nevertheless, as Karen Brutyan told ArmInfo correspondent, this does  not mean that the Ministry of Finance is completely satisfied with  the work done. Key performance indicators - KPI, which allow us to  analyze the effectiveness of certain activities, as well as the level  of achievement of goals, still need improvement, there is also a  serious task associated with the development of public control  systems.

"For the second year in a row, all information regarding the budget  process becomes public at the planning stage, but, despite the  feedback from individual activists of civil society, there is a task  in its systematic manifestation," said the First Deputy Minister of  Finance. As a result, according to Karen Brutyan, the public finance  management system should ensure an equitable distribution of public  wealth.

The need to establish a more effective feedback between the  government and civil society, and the direct participation of the  latter in the decision-making process was also indicated by the head  of the cooperation department of the EU Delegation to Armenia Gonzalo  Serrano de la Rosa. According to him, the effectiveness of public  finance management is important for the European Union.  Earlier,  ArmInfo reported that the EU will support Armenia in the effective  management of public finances.  On September 19, 2017, in Yerevan,  the closing ceremony of the EU-funded program "Strengthening,  Efficiency and Transparency of the External Audit System in Armenia"  and the launch of the "Public Finance Management in the South  Caucasus in 2017-2020" program took place. The budget of the program  implemented by the German Society for International Cooperation (GIZ)  for Armenia and Georgia is 5.75 million euros, about 1 million euros  - EU co-financing. The main partners of the program in the Republic  of Armenia were the Ministry of Finance, the National Assembly, the  Audit Chamber, the State Revenue Committee (SRC) and civil society.  The goal of the program is to bring public finance infrastructure in  line with European and international standards, helping to increase  their efficiency and accountability.  In Armenia, the GIZ (German  Society for International Cooperation) office was opened in 2014 and  includes completed and ongoing projects to support economic  competition, environmental protection, biodiversity protection and  natural resource management, as well as advising the Government on  reforms in the legislative and legal systems .