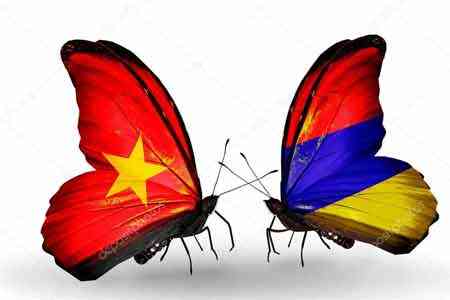 ArmInfo. At a meeting on December 10, the National Assembly of Armenia ratified the protocol on the exchange of information between the customs structures of the  countries of the Eurasian Economic Union and Vietnam.

As Michael  Pashayan, Deputy Chairman of the State Revenue Committee of the  Republic of Armenia, noted in his speech, according to the document  signed in Brussels on June 28, 2018, customs information will be  exchanged, which will take place in electronic format in stages.  Implementation of the exchange of information on a regular basis will  facilitate the identification of transported goods, accelerate and  improve the efficiency of customs control, including through the use  of a risk management system, and the prevention of violations of  legislation. When exchanging information, a unification of  requirements, structures, formats and conditions for its  implementation will be ensured through the use of the Union's  integrated information system. On October 5, 2018, an experimental  exchange of information on certain types of goods in mutual trade  between the Federal Customs Service of Russia and the Main Customs  Directorate of the Ministry of Finance of the Socialist Republic of  Vietnam began. The customs authorities of other member states of the  Eurasian Economic Union will join the exchange of information later.  The implementation of the second stage of electronic information  exchange began on October 5, 2019 with the expansion of the list of  goods for information exchange. From October 5, 2021, the third stage  of electronic exchange of information should be implemented, while  information will be exchanged in respect of all goods in trade  between the member states of the Eurasian Economic Union and the  Socialist Republic of Vietnam. In July 2016, an agreement was signed  between the EAEU and Vietnam, one of the points of which concerned  the exchange of customs information on the movement of goods and  vehicles. Armenia signed a document with a reservation related to the  need to complete all domestic procedures. For this reason,  information is still not exchanged. The document also contains three  additions that relate to the parameters, content and groups of goods  for which information is to be exchanged.