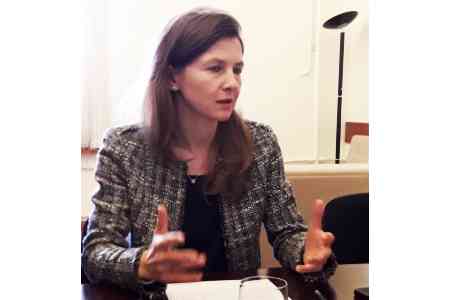 As the press service of the Prime Minister informs, congratulating  Nathan Porter on assuming office, the Prime Minister appreciated the  ongoing cooperation with the IMF and the Fund's continued assistance  to the Government's economic agenda. Coming to the economic situation  in Armenia, Nikol Pashinyan noted that more than 7% economic growth  is expected this year (against 4.9% set in the budget-ed. note),  which makes him feel confident and optimistic about next year's  economic performance that will help the Government implement its  ambitious programs. With reference to the effective implementation of  the ongoing institutional reform, capital investment, and public  procurement reform, the Head of Government stressed the importance of  interaction with international partners, including the IMF.

Nathan Porter said Armenia and the IMF have built up a strong  mutually beneficial framework of partnership, and he stands ready to  further strengthen it. Welcoming the reforms underway in Armenia, Mr.   Porter assured that the IMF will continue to back the Government with  its development agenda.

The interlocutors exchanged views on the cooperation agenda, the  ongoing joint programs and the educational reform, with a focus on  capacity development and future actions.

To recall, Armenia became a member of the International Monetary Fund  (IMF) on April 28, 1992. During this period, the country has  repeatedly appealed to the IMF for financial and technical support,  and the organization has provided consistent assistance to the  country's economy through support of the balance of payments, as well  as macroeconomic policies agreed with the Armenian authorities.  The  last assistance under the Extended Fund Facility (EFF) was provided  from 2014 to 2017. During the April 2017 visit to Armenia, the head  of the IMF mission to Armenia, Hossein Samiei, stated that the  agreements reached with the Armenian government were, in fact,  fulfilled. Since then, the Armenian authorities have consistently  stated their desire to continue cooperation with the IMF in order to  ensure the continuity of programs to reform the country's economy.   In May 2019, the IMF approved the provision of Stand-by loans to  Armenia in the amount of about $ 248.2 million. Stand-by credit loans  have been provided since 1952 to IMF member countries for goals  agreed upon with the Fund on the basis of stand-by agreements. These  loan funds will be considered as a preventive measure and will not be  used until there are problems with the balance of payments due to  shocks