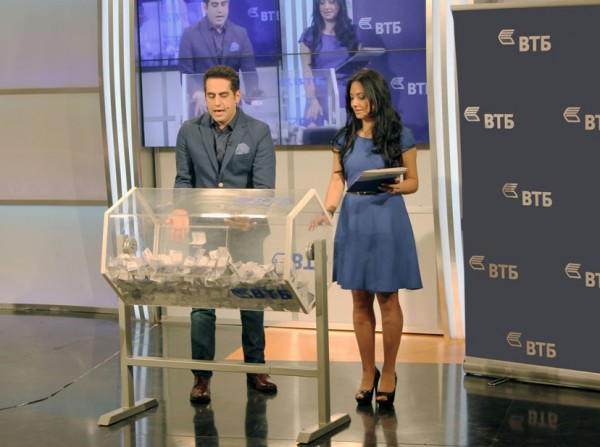 ArmInfo. The new "Summer with VTB" marketing campaign has increased the noncash turnover with Visa cards of VTB Bank (Armenia) by 70% over year. The press office of the Bank has told ArmInfo that the campaign was held from June 15 till September 2015, and the prizes were raffled off live on Kentron TV on October 10.

The cardholders of VTB Bank (Armenia), who used Visa cards to pay for shopping or services worth at least 300,000 AMD (including online shopping) in Armenia and abroad for the specified period of time, automatically took part in the campaign.
The drawing winners were selected on random basis. This time 10 money prizes on Visa cards worth 500,000 AMD each have been raffled off. The prizewinners are David Vardanyan, Minas Altunyan, Nazik
Gevorgyan, Zaruhi Hovsepyan, Felix Sargsyan, Hayk Hovsepyan, Karen Matevosyan, Sona Avagyan, Sofia Simonyan, Arthur Mashinyan.
"VTB Bank (Armenia) and Visa have summed up the results of the campaign aimed at popularizing the noncash payments "Summer with VTB". The results of the campaign demonstrate the sustainable growth of interest in Visa payment cards of VTB Bank (Armenia). The number of people appreciating their time and comfort and preferring noncash payments for shopping and services is growing," says Yuri Gusev, Director General, Chairman of the Management Board of VTB Bank (Armenia).
Irina Kamkhadze, Country Manager for Caucasus Countries at Visa, says that Visa is glad to support the striving of VTB Bank (Armenia) to develop the noncash payments in Armenia and promote their active use among the Visa cardholders. She said that the "Summer with VTB" campaign is certainly one of the most successful joint initiatives of VTB Bank (Armenia) and Visa.  More and more consumers participate in the campaign every time, she says.
According to the analytical review "Armenian Banks in Card Business" by the Agency of Rating Marketing Information (ArmInfo), as of 1 April 2015, VTB Bank (Armenia) retained leadership in terms of active
cards - over 401 thsd cards (24% year-over-year growth), including almost 385 thsd Visa cards (including over 88 thsd pension cards). The Bank became a member of MasterCard almost 2 years ago and issued over 16 thsd MasterCards by April 2015, joining the top ten. The Bank was in the lead by the amount of plastic transactions - over 186 bln AMD over 2014 (33% y-o-y growth). As of 1 April 2015, the Bank had 298 POS-terminals and 157 ATMs. Before 2013 the Bank issued and served Visa international cards. In September 2013, it became a principal member of MasterCard and started issuing and serving Cirrus/Maestro, MasterCard Standard and MasterCard Gold cards. Along with it, the Bank serves ArCa local cards and has its own processing center.
VTB Bank (Armenia) joined VTB Group in April 2004 and is fully owned by VTB Group, the second biggest bank in Russia. VTB Bank (Armenia) is one of the leaders of Armenia's banking sector. It has 67 branches all over the country (the largest branch network in Armenia).
POST A COMMENT