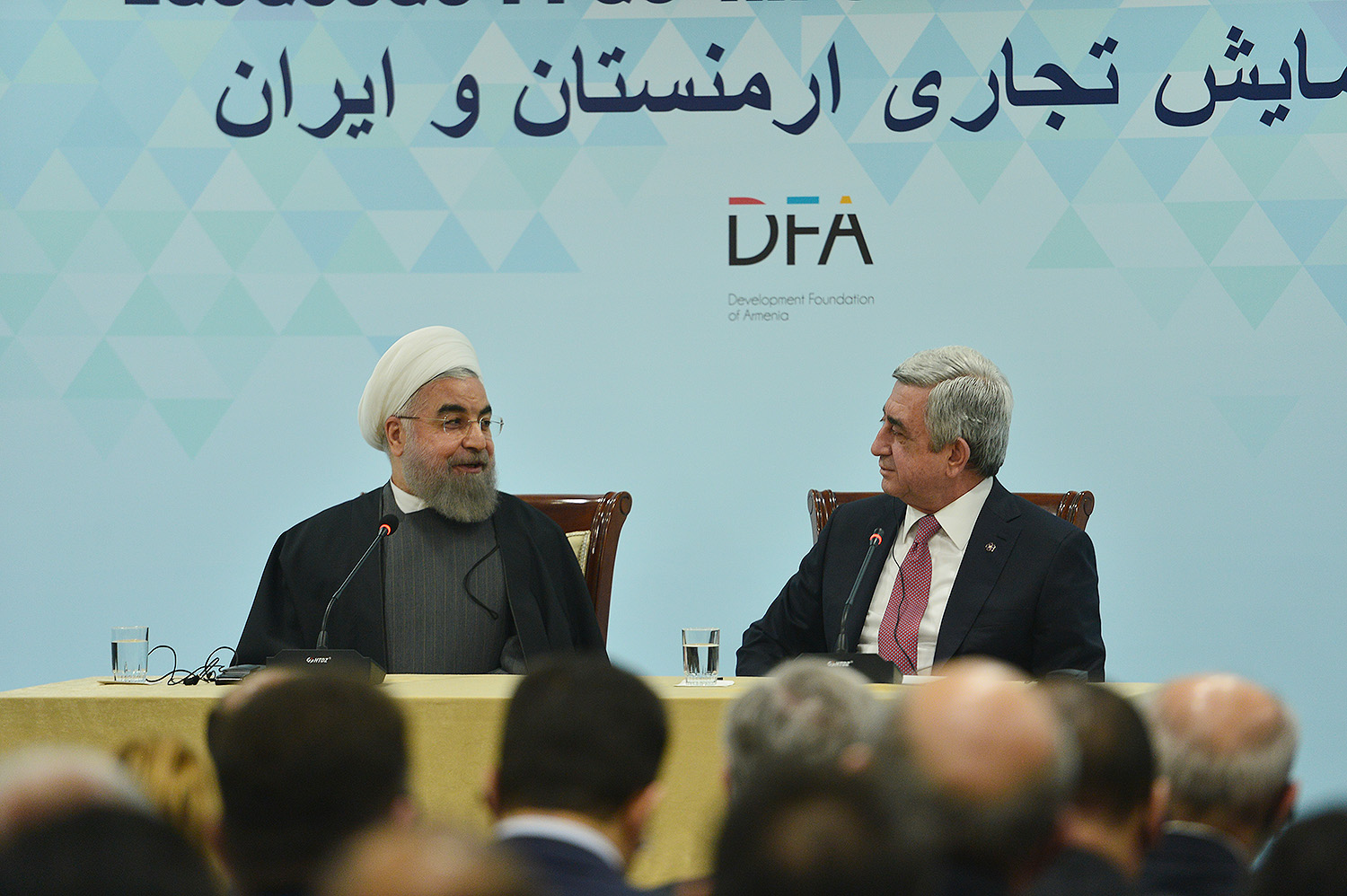 ArmInfo. '' I will keep it under my personal control all the businesses that the Iranian entrepreneurs will establish in Armenia'', Armenia's President Serzh Sargsyan stated on December 21 at the Armenian-Iranian business forum, where he arrived with his Iranian counterpart Hassan Rouhani, the press-service of the Armenian President informs.

'Today in Armenia every prerequisite has been created to make investments and conduct successful business. First of all, I would like to mention that even though Armenia is a country with small and open economy and for that very reason is susceptible to the negative impulses coming from outside, nonetheless thanks to the tax, budgetary and monetary policies we have been able to ensure a stable macroeconomic environment in the country.

A comparative advantage of making investments in Armenia lies in the fact that our country has preferential trade regime with many countries. Businessmen of these countries working in Armenia can benefit from the wide opportunities provided by Armenia's membership to the Eurasian Economic Union. Goods made in Armenia with zero customs fee, without any administrative hurdles can freely enter the 180 million strong market of the members of the Eurasian Economic Union. Besides, our country has a free trade agreement with almost all countries of the CIS countries. Armenia enjoys also the Generalized System of Preferences (GSP) with the US, Canada, Switzerland, Japan and Norway and advantages of the GSP+ system provided by the EU.

As a neighbor and friendly for Iran country, Armenia may also become a gateway and additional transport corridor towards the EU and CIS member states. With this regard, I stress the importance of the North-South highway as the shortest transit route linking the ports of the Black Sea to the seaports of the Persian Gulf.

There is no doubt that our bilateral economic relations have great potential; however, there are certain difficulties on the road for their disclosure which require us to work daily with diligence and make joint decisions. In particular, the entrepreneurs of the two countries continue to view as rather complicated regulations related to business activities and investments. Among the pending issues I would underscore also the facilitation of the procedures related to the import of goods from Armenia into Iran and vice versa, in Syunik marz - issues of cooperation between the free economic zone to be created in the area bordering Iran and Iranian Aras free economic zone'', the Armenian President mentioned in his speech.

Iran's President Hassan Rouhani for his part informed that growth of export of Iranian gas is on the agenda of negotiations between Iran and Armenia. ''Gas will contribute to activation of the country's economy without harming nature, which is very important'', Rouhani said. According to the Iran's President the governments should ensure the best conditions for businessmen of the two countries neutralizing possible obstacles.

To note, more than 170 businessmen, 90 of which from Iran, participated in the work of the forum. Within the forum meetings in B2B format will be held, during which the sides will be able to strengthen and deepen ties and agree on joint programs.

According to the National Statistical Service of Armenia trade turnover between Armenia and Iran in Jan-Oct 2016 totaled $199mln with 14% y-o-y decline. Particularly,  exports dropped by 3.8% to $65mln and imports by 18.2% to $134mln. Iranian investments into Armenia's economy have also significantly declined. According to official statistics, the total net flow of investments in Jan-Sep 2016 totaled 220 mln AMD ($460 thsd) versus 315 mln AMD for the same period of 2015.Net flow of direct investments for 9 months 2016 totaled 27.0 mln ($57 thsd) versus negative 98.3 mln drams a year before. The amount of accumulated Iranian direct investments totaled 2.2 bln drams ($460 mln) by the end of September.