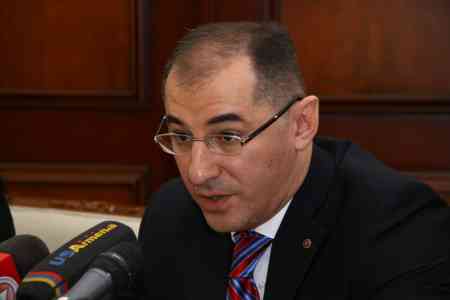 ArmInfo. The Armenian government spoke out against the legislative initiative of the Elk faction to review the excise tax on gasoline, diesel fuel and liquefied gas.  "The proposed changes will have a negative impact, including on the implementation of the revenue side of the state budget," Finance Minister Vardan Aramyan said at a government meeting on February 15.

According to the minister, "Elk" proposed revising a number of regulations of the Tax Code of 2016. In particular, the fraction considers it reasonable to restore the former excise tax rates with gasoline and diesel fuel (instead of AMD 40 thousand, set 23 thousand drams for gasoline, and set AMD 8,330 for compressed gas instead of 25 thousand drams).  In addition, there are proposed changes to the income tax, supplementing it with another tax scale - for employees receiving salaries in the range of 150,000-300,000 AMD, fixing a tax of 26%.

According to Aramyan, the issue was discussed repeatedly. Nevertheless, as the head of the Ministry of Finance reminded, during the revision of the tax legislation and the adoption of a single document in the person of the Tax Code, the government took very bold steps - significant allowances were made to create the necessary tools and ensure a favorable business environment.

Currently, according to the minister, the changes proposed by the Elk faction can lead to negative consequences in the form of loss of revenue for the budget. It will be necessary to decide how Armenia intends to fill these losses. "Our approach is this: if we choose between taxation of production and consumption, then, as international practice says, it is more appropriate to tax consumption, because in this case we do not impede economic growth," he explained.

At the same time, the Minister recalled that within the framework of the Tax Code, from January 1, 2018, workers pay income tax on a new scale, which is more favorable for them. Thus, the tax burden for citizens receiving wages less than 279 thousand drams, and this is 540 thousand or 90% of all employees, has decreased. The proposed "Elk" change will provide additional income for 2,000 citizens on average in the amount of about 420 drams.

As a result, as Vardan Aramyan noted, the proposal is unreasonable, since it does not envisage mechanisms for compensation of budget losses.