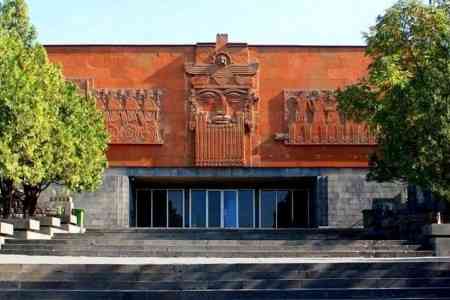 ArmInfo. The Council of Elders of Yerevan on December 16 at an extraordinary meeting approved a draft agreement on the provision of $ 1.65 million for the  construction and improvement of the new building of the Erebuni  Archaeological Museum-Reserve. The project is the result of a  collaboration between the Municipality of Yerevan and the John D & Sosi Balian Foundation .

A memorandum of intent was signed between the IDeA Foundation, the  Erebuni Museum Reserve, the Municipality of Yerevan and the John D  & Sosi Balian Foundation on April 5, 2019. On October 3, Yerevan Mayor  Hayk Marutyan and American entrepreneur John Balian signed an  agreement on providing funds for the construction of a new building.  According to the document, $ 1.3 million will be spent on  construction, which will be carried out on a plot of 3000 sq.m.

: in the exhibition halls  equipped with the latest technology, visitors to the Erebuni  historical and archaeological reserve will be able to virtually track  different periods of Yerevan's history. Such an opportunity will be  provided to them after the commissioning of the new museum complex.

The Erebuni Archaeological Museum-Reserve is located in Yerevan on  the Arin-Berd hill, next to the ruins of an ancient Urartian  fortress. Here are collected about 13 thousand archaeological finds  relating to both the pre-Urartian and Urartian, Hellenistic and early  Armenian eras, as well as exhibits discovered as a result of  excavations of the Erebuni fortress in 1950-1959 and the Urartian  city of Teishebaini, which took place on the Karmir- Bloor (Red Hill)  in the years 1939-1958. Academician Boris Piatrovsky directed these  works. The best finds today are presented in the Urartian Hall of the  Hermitage.

The Erebuni Museum itself was opened in 1968 on the 2700th  anniversary of the founding of Yerevan.