Ministry of Finance: In September 2020, Armenia will have to repay  the last tranche of Eurobonds of 2013 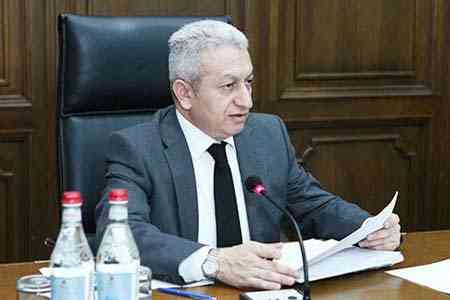 According to the Minister, at present the republic, like the whole  world, due to the unprecedented pace of the spread of the  coronavirus, was in a state of the highest degree of uncertainty.  According to current forecasts, the coronavirus pandemic will lead to  modest investment, increased unemployment, and possibly increased  bankruptcy. In this situation, the government's task is to mitigate  the consequences of COVID-19 and create the prerequisites for a quick  recovery. At the same time, the executive body does not intend to  raise the issue of postponement of payments on previously attracted  credit resources, including the rest of the Eurobonds of the first  tranche of 2013. In September, the last coupon of $ 100 million from  the previously placed $ 500 million in the form of Eurobonds will be  paid. This will happen, in particular, due to 300 billion drams  accumulated in a single treasury account. The government cannot fully  use these funds, since a significant part of them is the property of  the budgets of local governments.

Atom Janjughazyan emphasized that unpredictability due to the spread  of a new type of virus forces the government to reconsider previously  established restrictions on the volume of public debt and deficit in  the country's GDP. The total deficit will amount to 324 billion  drams, having increased by 169 billion drams compared to the planned  level. Taking into account that, the previously planned level was 161  billion drams, thus, the total amount of necessary funds to pay off  the state budget deficit will be 260 billion drams. The deficit  repayment is seen in attracting credit resources, issuing state  treasury bonds, and, it is possible, the next tranches of Eurobonds.  In the latter case, the state will so far abstain in light of the  COVID-19 pandemic. The minister informed that the International  Monetary Fund, which agreed to provide about $ 300 million to  Armenia, will become one of the sources of financing. But, as the  head of the Ministry of Finance noted, the government sees its  mission in the future in becoming a donor country, and not a state  attracting borrowed resources. He especially noted that Armenia is  considered by creditors as a stable and dynamically developing  borrowing state and therefore can't even in the current situation  consider issues related to postponing the repayment of payments on  current debt obligations. It should be noted that the IMF agreed to  provide the government of Armenia $ 280 million to mitigate the  effects of the COVID-19 pandemic. The main purpose of using these  funds will be to significantly strengthen the health care system, as  well as mitigate social and economic shocks.