Production of ozone generators for air purification launched in  Armenia 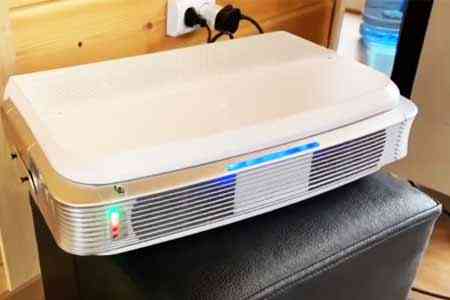 ArmInfo.Armenia is preparing for exporting the first batch of ozone generation devices developed by domestic manufacturers intended for purification of premises. The units are designed and manufactured at the production base of the ''Ozone Air''  enterprise.

As the head of the enterprise Ara Khachatryan said in an interview  with ArmInfo correspondent, the competitive advantage of this device,  designed for disinfection of 50 sq. m. area is that the air is  disinfected not only with ozone, but also with ultraviolet rays and  activated carbon. This "three in one" method, according to  Khachatryan, was developed by Armenian engineers and significantly  increased the efficiency of the installation. Local engineers have  added an IT component with the ability to smartly control the  disinfector's functions. The design of the device was also developed  at the enterprise.  Khachatryan said that while the majority of  technological units, up to 70%, are acquired by the enterprise from  abroad, however, it is possible that through internal cooperation the  level of localization of production can be gradually increased. So  far, the enterprise's capacities allow producing up to 10 thousand  units of such compact devices per year, but the enterprise is already  receiving proposals for the production of more powerful equipment  designed for large premises up to 1000 sq. m. Investment interest  from the UAE, Egypt, South Africa is outlined. It is possible that  Ozone Air will start producing such large disinfectants under a  foreign brand, but, nevertheless, the establishment of technologies  will become a great advantage for industrial and innovative  development within the country.

Speaking about the level of potential demand for products, Khacharyan  is confident in an upward trend and an increasing demand of such  production in connection with the coronavirus pandemic, which  humanity will not be able to overcome soon.

The company is not going to limit its activity only to the production  of ozone generators. There are already prototypes of charging  stations for electric vehicles that work for both simple famous  brands and Tesla vehicles. Armenia, according to the head of the  company, can become one of the main suppliers of such equipment  within the region and the EAEU market. In Armenia itself, about 400  electric vehicles of various brands have already been registered and  their number will undoubtedly increase.