Telecom Armenia summed up the results of the 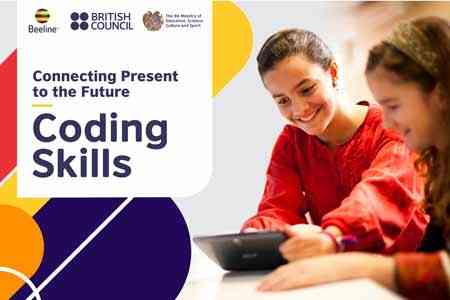 ArmInfo. Telecom Armenia (TM Beeline) together with the Armenian office of the British Council and the Ministry of Education, Science, Culture and Sports have summed up the results of the pilot project "Coding Skills: Linking the Present  and the Future".

Within the framework of the project,  extracurricular coding courses were taught to students of three  schools in Yerevan. According to the company's official statement,  the implementation of the program was aimed at developing basic  coding skills, as well as other key digital skills in schoolchildren,  including critical analytical thinking, creativity and teamwork.

The courses were delivered using Micro: bit micro-equipment provided  to students during pandemic to work from home and under the guidance  of computer science teachers to develop projects.  According to the  source, the results of the program were summed up through a  competition between the capital's schools No. 16, 170 and 97, which  are the beneficiaries of this project.  In an online competition,  each team using Micro: bit devices submitted projects related to  epidemiological regulations, including solutions for social  distancing, hand sanitizing and warning signals to avoid the virus  via microbit devices.

The jury included Deputy Minister of Education, Science, Culture and  Sports of Armenia Zhanna Andreasyan, Telecom Armenia Brand  Development and Communications Director Ashot Barseghyan and Head of  Educational Programs of the British Council Addeh Hovassapian.  According to the source, the winner was the project presented by the  school ь16 named after Avetik Isahakyan. "It is very important for  our team to realize that as a company we support high-quality  education of young people, and today, seeing the wonderful projects  of so many talented young people, we are once again convinced of the  importance of their implementation," said Ashot Barseghyan.  It is  reported that before the launch of the program, teachers of English  and ICT of the beneficiary schools underwent retraining in the use of  the Micro: bit toolkit. Schools were provided with about 70 units of  Micro: bit equipment and related educational resources. About 100  students were involved in the "Coding Skills" program.