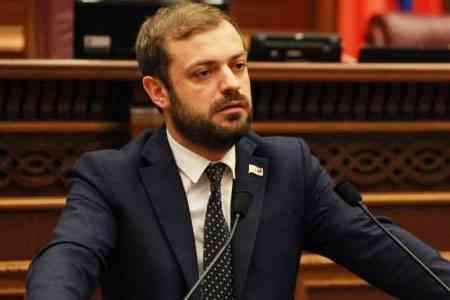 ArmInfo.Thanks to various government assistance programs in the amount of about 200 billion drams, Armenia was able to maintain macroeconomic stability in 2020.   This was stated by the MP from the "My Step" faction Gevorg Papoyan  on April 20 during a briefing.

In particular, he said, contrary to forecasts of a double-digit  economic downturn by the end of 2020, Armenia closed the economic  year with a decline of 7.6%. In addition, after the war, Armenia was  able to issue another Eurobond at an unprecedented low rate of 3.6%."  In January-February, compared to the previous year, tax revenues to  the budget increased, in particular, exceeded the planned figure by  8%, the month of March is also encouraging, which indicates a rapid  economic recovery, " the MP said.

At the beginning of 2021, Armenia placed the 4th issue of 10-year  debt securities in the amount of $750 million among international  investors. The established annual yield of bonds of the 4th issue was  lower than the yield of the 3rd issue-3.875% against 4.625%.   According to the Bloomberg information system, investors ' demand for  Armenian debt securities exceeded $ 2.5 billion. The initial  benchmark yield of Eurobonds to maturity in February 2031 was  4.375-4.5% per annum. The main underwriters of the 4th tranche were  City Bank, J. P. Morgan Securities plc. and HSBC Bank Plc.