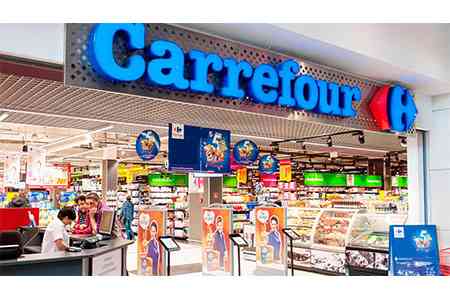 ArmInfo. Carrefour Armenia intends to open 10 more supermarkets in Armenia within the next year, its CEO Vache Arsen said at a meeting with acting Economy Minister Vahan Kerobyan.

According to the press service of the ministry, the company will open  its stores within the framework of the developed four-year  development plan, during the implementation of which the retail chain  intends to open its first regional medium-format retail outlets.   According to Vache Arsen, the idea of expanding the network was  adopted due to a significant improvement in the investment climate  and competitive environment in Armenia. He expressed confidence that  if the project is successfully implemented, the company will start  implementing new plans.

According to the CEO of Carrefour Armenia, about 80% of the products  offered on supermarket shelves come from different regions of  Armenia, which stimulates and supports the agricultural sector of the  country.

The minister and the head of the company discussed the possibility of  selling Armenian products in the entire Carrefour supermarket chain  abroad. Vache Arsen noted that the expansion of Carrefour's presence  in Armenia will make it possible to organize the sale of  Armenian-made products in Carrefour's international networks.

It is noted that with the expansion of its presence, Carrefour  Armenia plans to take steps to digitalize its business, in  particular, by creating and developing an online trading platform.   Kerobyan expressed readiness to support all the company's investment  initiatives within the scope of his competence.  Note that the cost  of the investment program is not disclosed.

Carrefour Armenia is a franchise of a large French retail company  Carrefour. The franchise operates in Armenia and Georgia and is owned  by the Majid Al Futtaim Group of Arab developer and billionaire  Meijit Al Futtaim. It is one of the largest retail chain operators in  the Middle East and North Africa and holds exclusive rights to the  Carrefour franchise in 38 countries in the Middle East, Africa and  Central Asia, including Georgia and Armenia. Majid Al Futtaim Group  includes four main subsidiaries: MAF Properties LLC., MAF Trust LLC.,  MAF Retail LLC. and MAF Ventures LLC. and its activities are an  integral part of the economic development of the United Arab  Emirates.

Recall that in April 2019, Armenian President Armen Sarkissian held  talks with Alain Bejjani, CEO of Majid Al Futtaim Holding, and  discussed with him the possibilities of expanding the holding's  activities in Armenia.

In Armenia, the company is currently represented by three  supermarkets located in different malls. The first store was opened  in Yerevan in 2015.