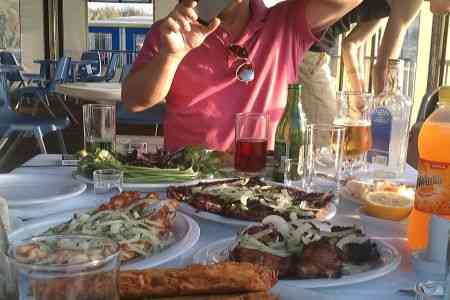 ArmInfo. According to the version of the project "Let's go, let's eat", broadcast on the NTV channel, Armenia topped the TOP-5 countries recommended to Russian  tourists for the May holidays.

The availability of direct flights at affordable prices from a number  of Russian cities, including Moscow, St. Petersburg, Yekaterinburg,  Rostov-on-Don and Mineralnye Vody, was noted as an advantage. <Inside  the country - great service, delicious food and a lot of  entertainment! This vacation will definitely fit into the family  budget, "says the official page of the project" Let's go, let's eat  "on Instagram.

To note, in 2016 the project "Let's go, let's eat!" was recognized as  the best travel program, becoming the owner of the National  Geographic Traveler Awards magazine award, and twice became the  winner of the Media Creator competition in the category "Television"  in 2016 and 2017.

According to the Statistical Committee of the Republic of Armenia,  375.2 thousand tourists visited Armenia in 2020, which is 80.2% less  than a year ago.