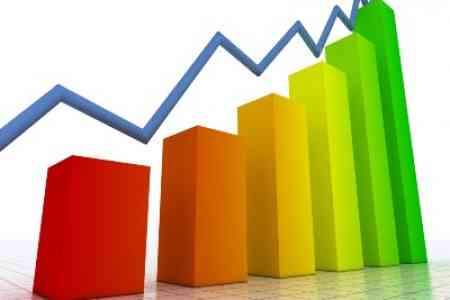 ArmInfo. In Armenia, economic activity in the 1st quarter of 2021 compared to the same period of 2020 decreased by 2% (against 4% growth in the 1st quarter of 2020).   According to the final data of the Statistical Committee of the  Republic of Armenia, only the construction sector and the energy  complex were in growth, while the industrial sector, agricultural  sector, trade, and the service sector are still overdrawn.

Meanwhile, in March 2021 compared to February (on a monthly basis),  economic activity increased by 9.6% (against a 0.2% decline in March  2020). Moreover, the upward dynamics is recorded in all areas, and  the construction sector and the energy complex - 23.5% and 16%,  demonstrate the most significant growth respectively, followed by  trade and services with the same 9.5% growth, and the industrial  sector with 9.1% growth. A year earlier, in March 2020, compared to  February, only the construction sector was in growth (14%), and all  other industries went into decline: the energy complex - 15.4%, the  service sector - 5.8%, the trade sector - 3, 5% and the industrial  sector - 2%. For the agricultural sector, statistics for the month  are not indicated.

To note, the state budget of the Republic of Armenia for 2021  provides for a GDP growth of 3.2%. The Central Bank of Armenia  forecasts 1.4% GDP growth for 2021, the IMF's forecast GDP growth in  Armenia in 2021 looks more conservative - 1%. And the World Bank  forecasted 3.4% GDP growth in Armenia in 2020.  To recall, in 2020,  in Armenia, as part of measures to prevent the spread of the  coronavirus pandemic, a state of emergency was introduced from March  16, which lasted until September 12, but security measures were  retained after the emergency was lifted. In this regard, a temporary  ban was imposed on many types of economic activity in the first month  of the state of emergency, which was partially lifted in the second  half of April, and the ban was completely lifted on May 18. From the  same day, public transport (including the metro) and many public  catering and services began to work, but the activities of  international air, rail, and bus communications were still limited,  but from September 2, restrictions on entry and exit to Armenia were  lifted across air borders.