Lavrov: As we get out of the epidemiological situation, the trade  turnover between Russia and Armenia will increase rapidly 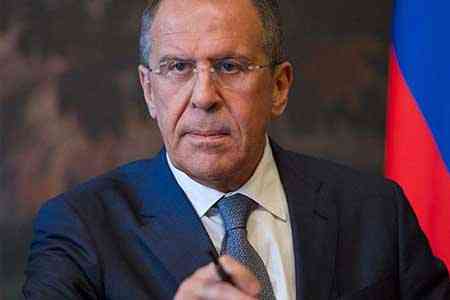 ArmInfo.The Armenian-Russian partnership is so broad that it is simply impossible to physically expand it. Russian Foreign Minister Sergei Lavrov said on May 6, at a  joint press conference with his Armenian counterpart Ara Aivazian,  answering a question about the possibility of a sharp expansion of  cooperation.

At the same time, he stressed that a number of events will be planned  and held, timed to the anniversary date of the establishment of  diplomatic relations between the two countries.  "As for the trade  turnover, to be precise, it decreased by 9.6% and amounted to 2  billion 300 million dollars. Even so, a solid volume remained. There  is no doubt that as the epidemiological situation is overcome, the  trade turnover will increase rapidly intergovernmental commissions  headed by deputy prime ministers are engaged in the restoration of  trade, "Lavrov said.  In this vein, the Russian minister also touched  upon the opportunities that the work of the Trilateral Group of  Deputy Prime Ministers opens up to unblock economic ties in the  region. Lavrov is convinced that when the agreements on unblocking  economic and transport ties in the region are implemented, they will  significantly increase the volume of Russian-Armenian ties between  Armenia and its neighbors in the region.  In turn, acting Foreign  Minister Ara Aivazian stated that the consequences of the coronavirus  were felt all over the world. "As it was already indicated, in our  bilateral relations a decline in trade turnover at the level of about  10% was recorded, but mutual desire and determination to reduce the  sharp decline. And at a meeting in Kazan, the prime ministers  instructed the relevant commissions with a list of works that will  activate economic cooperation," Aivazian said.  In his words, the  agreements of January 11 open up opportunities for diversification  not only for Armenia, but also for the region as a whole. "The  Foreign Ministry attaches particular importance to active economic  diplomacy. We also attach great importance to the presence in the  Russian Federation of a large Armenian Diaspora, which plays the role  of a bridge between the two countries. We are sure that the result  will soon be evident," Aivazian summed up.  Note that according to  the data of the RA Statistical Committee. Armenia's foreign trade  turnover with the EAEU countries in January-December 2020 compared to  the same period of 2019 decreased by 2.6% (against 15.1% growth a  year earlier), amounting to $ 2.2 billion. Negative foreign trade  balance of Armenia with the EAEU countries amounted to $ 842.4  million, having increased over 12 months by 8.6% (against growth by  26.4% a year earlier) against the background of an increase in  imports by 0.2% to $ 1.5 billion, while exports fell by 8.3% to $  705.3 million (against the growth of imports by 17.6% and exports by  10.5% a year earlier).

According to statistics, Armenia's foreign trade turnover with Russia  decreased by 3.5% per annum (against 14.9% growth a year earlier),  while Russia retains leadership both in the total volume of foreign  trade turnover ($ 2.2 billion) and in exports and imports ($ 676  million and $ 1.5 billion, respectively). Exports with Russia  reversed the trend from 10.3% growth to 9% decline, which was also  observed for imports from 17.4% growth to 0.7% decline.