Kocharian on energy prospects for Armenia: It is not a problem to  come to an agreement with Rosatom 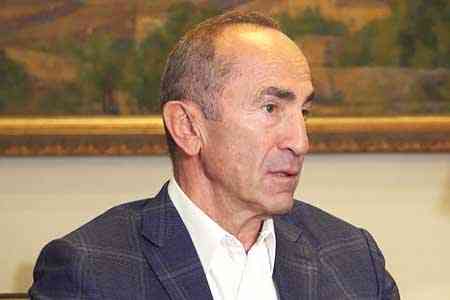 ArmInfo. Head of the Hayastan (Armenia) bloc, RA second president, Robert Kocharian, on June 14, during a meeting with voters in Metsamor, Armavir region, spoke about Armenia's energy prospects and assured that everything would be done  to extend the life of the Armenian NPP.

According to the former president, Armenia has the potential to  become a platform for the production of electricity for the countries  of the region. So, in his words, Armenia has surplus production  capacities - "we generate more energy than we consume". "The  generating capacities, at least until recently, were loaded by about  50%. The 5th power unit of the Hrazdan TPP has also been added to the  existing capacities, which is not fully exploited only due to the  fact that the third Iran- Armenia power transmission line was not  built, although the construction should have been completed long ago,  "he said.

The second President of the Republic of Armenia (1998-2008) recalled  that Armenia pledged to close the Armenian (Metsamor) nuclear power  plant back in 1995. "Then the EBRD began to finance the construction  of the 5th power unit of the Hrazdan TPP with the condition of  closing the nuclear power plant. I managed to stop the process, and  the 5th power unit was mothballed together with the Chinese and we  reached the point that the issue of closing the nuclear power plant  was excluded from our agenda with the EU," he pointed out.

In addition, according to the second president, serious financial  investments were made to raise the safety level of the nuclear power  plant, after which, having divided the issues of closing the nuclear  power plant and the construction of the 5th block of the Hrazdan TPP,  the latter was built with the financing of Russian Gazprom. "We will  do our best to extend the life of the Armenian NPP," the prime  minister assured.  As for the construction of a new nuclear power  unit, as Kocharian pointed out, the issue is not in construction, and  not even in finding funds for this, but in whether it will be  possible to find sales markets, since Armenia already has a surplus  of generated electricity today. "It is not a problem to come to an  agreement with Russia, with Rosatom. Everything can be organized very  quickly," concluded Kocharian.

To recall, now Armenia and Iran are connected by two 220 kilovolt  power lines. The new line, 400 kV and in two chains, will triple the  capacity for electricity exchange. Initially, the project for the  construction of the Iran-Armenia power transmission line was planned  to be completed by the end of 2018. However, the question dragged on.  The last time the project was postponed was in 2019. It was announced  that construction will be completed at the end of 2020. According to  the latest information, the construction of a power line from Iran  will be completed by the end of 2021. The power line should be built  with funds from the Iranian side. Of the total amount of 107.9  million euros, 77% was provided by the Export Development Bank of  Iran (EDBI), 23% - by the main contractor Sunir.