Ambassador: Economic cooperation between Armenia and Slovenia does  not correspond to the existing potential 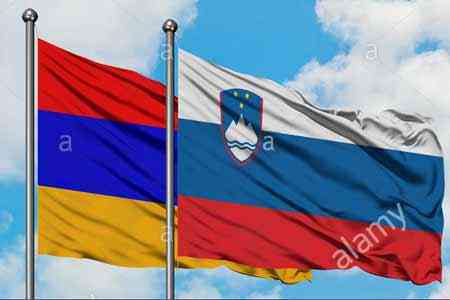 ArmInfo.Economic cooperation between Armenia and Slovenia does not correspond to the existing potential. Ambassador Extraordinary and Plenipotentiary of Slovenia  to the Republic of Armenia Tomaz Mencin (residence in Kiev) expressed  a similar opinion during a meeting with representatives of the  Chamber of Commerce and Industry of Armenia (CCI).

In this context, the diplomat attached importance to strengthening ties between the  businesses of the two countries, stressing the great role of public  diplomacy.

The Ambassador noted that, being a relatively new member of the EU,  Slovenia may pass on its integration experience to the Armenian side  and contribute to the deepening of economic cooperation.

According to the press service of the Chamber, during the meeting,  the Honorary Consul of Slovenia in Armenia, for his part, highlighted  the possible areas of promising Armenian-Slovenian cooperation, in  particular, he pointed to the sectors of healthcare, engineering  technologies, agriculture and tourism.

It should be noted that according to the Customs data of the Republic  of Armenia, in the first half of 2021, Armenia exported to Slovenia  only 41.3 tons of aluminum foil, the customs value of which was $  147.8 thousand.

At the same time, products with a total value of $ 4.7 million were  supplied to the Armenian market from Slovenia, with an increase of  18.2% over the year.