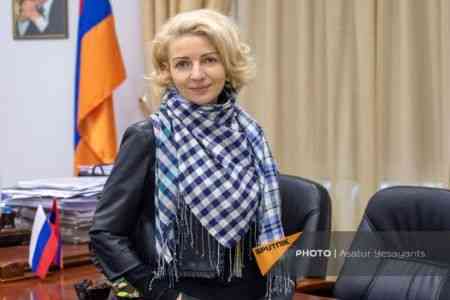 ArmInfo.The Armenian market is traditionally attractive for Russia. Trade representative of the Russian Federation in Armenia Anna Donchenko stated this during a press conference held on the occasion of the organization of a  diversified business mission of Russian companies to Armenia from  Oct.18 to Oct. 20, 2021.

The trade representative determined her opinion, among other things,  by the number of enterprises that will visit Armenia within the  framework of the business mission, the variety of sectors they  represent, and the dynamics of trade relations between the countries.

According to Donchenko, on October 18 a delegation will arrive in  Armenia, which will include about 30 companies representing various  sectors, from the agro-industrial complex, pharmaceuticals, medicine,  and ending with IT. The visit of Russian business, as noted by the  trade representative, is conditioned by the intention to conclude  export contracts with Armenian partners.  She also said that the  business mission program is multi-format, in particular, in addition  to classical meetings in the B2B format, round tables, seminars,  forums, offsite events (visits of Russian business to Armenian plants  and factories) are expected.

At the same time, Donchenko noted that interregional cooperation  between Russia and Armenia is also developing noticeably. "We see  that interregional cooperation is acquiring new strength and  character.  Currently, 70 regions of the Russian Federation maintain  trade relations with Armenia, of which 40 have cooperation  agreements," she added. To note, Russia is traditionally the main  trade partner of Armenia.  According to the data of the Statistical  Committee of the Republic of Armenia, in January-August of this year,  the trade turnover between Armenia and Russia amounted to $ 1.5  billion, which is 12% higher than a year ago. At the same time,  exports increased by 30.9% to $ 522 million, imports by 4% to $ 1  billion.