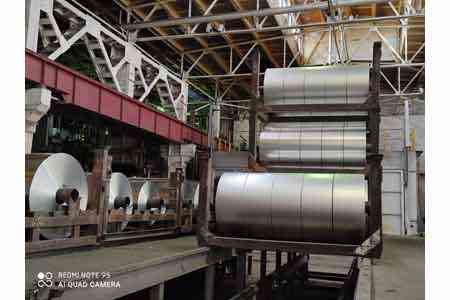 ArmInfo.The original project implemented in the cutting and annealing department of the ARMENAL plant allows to improve the quality of products and reducing scrap. This result was achieved by changing the mode of the final annealing of the foil.   This is stated in the message of the plant.

The losses were due to the formation of thermal folds on the surface  of the annealed rolls. "When the metal is removed from the furnace, a  thermal shock occurs due to a sharp temperature drop. This is an  objective factor, but we have found a way to neutralize its  consequences for the finished product," said senior foreman of the  department Samvel Hovhannisyan.  Based on the data of the study of  the process taking place inside the furnace, the mode of extraction  of the annealed rolls has been changed. It was decided to open the  oven door in stages: first by 10-15 cm, after two hours - completely,  but the metal remains in place and only after another two hours the  rolls are transferred to the racks, where the foil cools down to  100-150 degrees. Then the forced cooling fans are switched on.   Step-by-step actions avoided the formation of thermal folds. Now  there is no longer the need to cut off several turns of annealed foil  from the surface of the rolls, which are sent to remelting in the  form of waste.

The implementation of the improvement proposed by S.  Hovhannisyan  served to increase the yield of suitable products both for the  cutting and annealing department and for the plant as a whole. At  the same time, the consumption time of each boil cycle is reduced by  two hours, as does the energy consumption.

The ARMENAL plant has been part of RUSAL since 2000. It is one of the  largest industrial enterprises in Armenia and the only producer of  aluminum foil in the Caucasus and Central Asia. Created on the basis  of the Kanaker aluminum plant, which was commissioned in 1950.