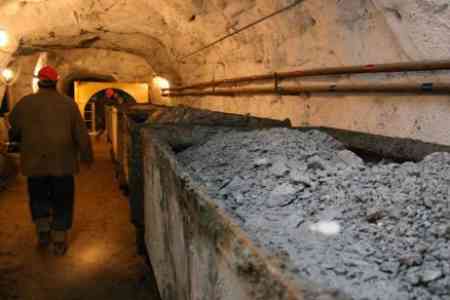 ArmInfo.By November 2021, the metallurgical industry of Armenia accelerated its y-o-y growth rate from 3.7% to 16.4%. According to the data of the Statistical  Committee of the Republic of Armenia, such dynamics was provoked by a  surge in the production of castings from unalloyed (carbon) steel, as  well as the continued growth in the production of ferromolybdenum and  copper concentrate.

So, in January-October 2021, the production of castings from  unalloyed (carbon) steel increased 7.2-fold on a y-o-y terms,  amounting to 84.306 thousand tons. At the same time, over the month,  production volumes decreased slightly - by 0.7% to 9.071 thousand  tons.

An upward trend was also recorded in the production of  ferromolybdenum, the volume of which increased by 10% on a y-o-y  terms, amounting to 6.024 thousand tons. In October alone, 701.4 tons  of ferromolybdenum were produced, which is 31% more than in  September.

Copper concentrate production in January-October amounted to 319.2  thousand tons, with an insignificant 0.5% increase over the previous  year. And in October alone, the volume of production increased by  24.1% - up to 32.3 thousand tons.

For other types of metallurgical products, a decline was recorded. In  particular, in January-October of this year, production of molybdenum  concentrate decreased by 7.7% - to 18.840 thousand tons, and in  October alone there was a decline of 10.4% - to 1.595 thousand tons.

All metals produced in Armenia are exported, mainly to Europe and the  USA.