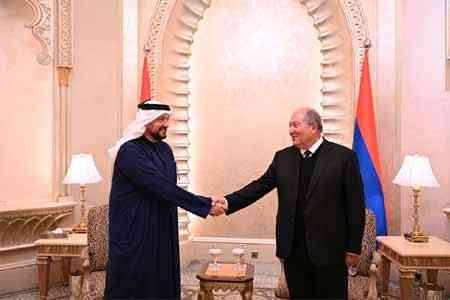 The sides discussed opportunities for developing cooperation in  renewable energy, up-to-date technologies, science and education. Mr  Sarkissian stressed that the investment project of construction of a  photovoltaic power plant with a capacity of 200 MW, a renewable  energy project in Armenia, with the Masdar company, is the first step  in mutually beneficial cooperation. He weclomed an agreement on the  construction of one more 200 MW power plant reached on January 16.

Armenia's president noted that the implementation of renewable energy  projects of construction of power plants with a total capacity of 400  MW will lay a solid basis for larger-scale cooperation and is the  first step toward diversifying Armenia's energy system.

"I hope the project will lay the basis for long-term cooperation," Mr  Sarkissian said.

The sides also discussed opportunities for large-scale investments in  wind-power engineering in Armenia.

On November 26, 2021, following the results of the competition, the  Armenian government signed an agreement with the Masdar Company on   the construction of the Ayg-1 photovoltaic power plant with a  capacity of 200 MW near Talin,. Earlier, in July of this year, Masdar   was declared the winner of the tender for the construction of this   photovoltaic industrial station. According to the tender offer, the  company offered a rather low tariff from the future solar generation  facility - $0.0290 excluding VAT per 1 kWh of electricity. The  beneficiary of 85% of the shares will be the Masdar Company, and 15%   of the shares will belong to the Armenian National Interests Fund    (ANIF) . Construction will be carried out in 2 years. The total cost  of the investment program is estimated at $174 million. Masdar is a  subsidiary of Mubadala Investment Company, UAE, with total assets of   $220 billion and one of the world's leading companies in the field of  renewable energy. It should be noted that according to the program  for the development of renewable energy sources, solar power plants  with a total installed capacity of up to 1,000 megawatts should be   built in Armenia by 2030.