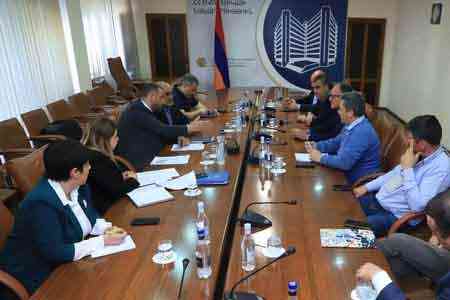 ArmInfo. Italian entrepreneurs are showing investment interest in the Armenian market. According to the official report of the Ministry of Economy, the head of the  Armenian economic department Vahan Kerobyan held a meeting with  representatives of a number of Italian companies that intend to  implement investment projects in Armenia in various sectors of the  economy.

According to the source, the parties discussed draft  investment programs, two of which relate to cattle breeding and pig  breeding. In addition, Italian entrepreneurs plan to build a sterlet  fish farm in Armenia, set up a large-scale production of high-quality  caviar, and also organize a greenhouse production of iceberg lettuce.  It is reported that the programs will be implemented with the  introduction and use of innovative equipment.

Reiterating their interest in effective activities in Armenia, the  Italian entrepreneurs noted that the purpose of this mission is to  discuss in more detail the format of cooperation with the Armenian  side, learn about the current legislative field in Armenia, state  support instruments and possible risks arising in the course of  activities.

In turn, Minister Kerobyan expressed readiness on behalf of the  Ministry, to contribute to the speedy implementation of the planned  projects.

According to the source, this is the second meeting of the Italian  business delegation with the Minister of Economy. The previous  meeting took place in February this year.