Mher Grigoryan: The activities of the trilateral working group, to  unblock transport communications, are definitely productive 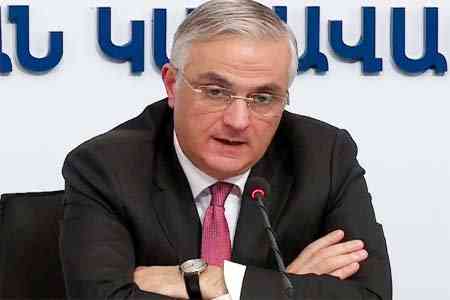 ArmInfo. Deputy Prime Minister of Armenia Mher Grigoryan stated that he considers the activities of the working group of Russia, Armenia and Azerbaijan to unblock transport communications productive. In an interview with RIA Novosti,  Grigoryan said that the parties managed to reach consensus on a  number of issues, but there are also disagreements.

"The activities of the trilateral working group, co-chaired by the  vice-premiers of Armenia, Azerbaijan and Russia, are definitely  productive. Subgroup experts have done a great job. There are  consensuses, but there are also disagreements, on which we are trying  to find solutions during our meetings>, Grigoryan said.  According to  him, the date of the next meeting of the working group will be agreed  in the near future.

Earlier, on January 11, 2021, during a meeting of the leaders of  Russia, Armenia and Azerbaijan in Moscow, an agreement was reached to  unblock regional communications. To this end, the parties decided to  establish a working group at the level of deputy premiers of the  three countries, which will focus on establishing transport and  economic ties in the region. On May 18 this year, Russian Foreign  Ministry spokeswoman Maria Zakharova stated during the briefing, that  the Russian side highly appreciates the activities of the tripartite  working group of deputy-premiers to unblock transport and economic  ties in the South Caucasus. She noted that the activities of the  trilateral working group were highly appreciated by the Foreign  Ministers of Armenia and Azerbaijan during the meeting with the  Russian Foreign Minister on May 12 on the sidelines of the CIS  Foreign Ministers Council in Dushanbe. According to her, the  co-chairs of the trilateral working group are in contact on a regular  basis in order to develop solutions that would suit all parties.